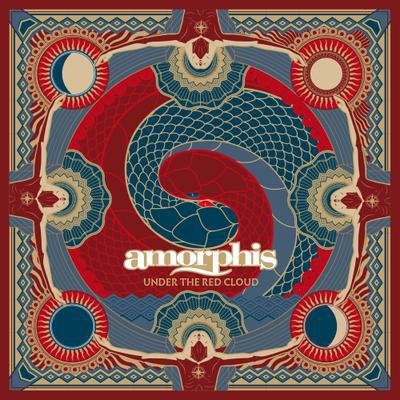 On their 12th studio album Finnish masters Amorphis show that there are simply no holds barred for them as they keep churning one masterpiece after another, so it seems that only sky is the limit. I know that I have spoiled the reading for you now but that’s just how it is and I can’t help myself so let’s now go and dissect Under the Red Cloud a bit deeper… It seems that in this phase of their career Amorphis have found the relationship with their producers to be very fruitful and inspiring, as for their previous album Circle Peter Tägtgren has painted the album in darker colors and pulled out the more aggressive side from the band. On Under the Red Cloud Amorphis have cooperated with Jens Borgen who was said to have the huge influence on the album – allegedly he has proposed the ideas for the song arrangements and worked very hard with the guys to achieve the final result so I guess that we can also thank him for the quality displayed on this release. As for the actual music, Amorphis have again brought something different here so all the naysayers who are accusing them to be churning the same album ever since Eclipse should pay more attention in listen to the music more closely as Under the Red Cloud clearly possesses something of its own that sets the album apart from the couple of its predecessors. What I would point out as the biggest virtue here is larger inclusion of progressive elements that will immediately remind you on one glorious album – yes, Under the Red Cloud resembles mostly on Elegy and you will feel that vibe throughout the course of the entire album with its brave direction. The music is in the same time epic, brutal, progressive and melodic – I know that it does not make much sense but just listen to Under the Red Cloud and you will see that Amorphis have seamlessly entagled all those elements into one whole in the way only they can. Tomi Joutsen may has got rid of his trademark dreadlocks but his delivery has remained as impeccable as ever, and I must say that he uses his growl and screams more than ever as the direction of the music dictated so. It should be noted that some high profile guests are present on Under the Red Cloud: Martin Lopez (ex-Opeth) has done the percussion on Death of a King, Chrigel Glanzmann from Eluveitie was responsible for whistles while Aleah Stanbridge has painted the album with female vocals, most notably in duet with Tomi on White Night. You have noticed that I have not singled out some songs as better or worse… that’s beacuse they are all perfect. There is no dull moment on Under the Red Cloud even if I tried to find one, the album is done just the way I wanted it to be and as I have said, there’s no stopping for Amorphis in this point of their career. I even fear for how long will they be able to keep this enormous lebel of quality but let’s kick back and ejoy it while it lasts… And if you have not realized it by now: Under the Red Cloud is the best album of 2015.