During these last months, and obviously even during last few years, it seems that the traditional metal is again spreading among the metal fans. Furthermore, which is even more important, one could easily notice that those bands that are more traditional oriented are delivering some of the best efforts at the scene. So, Doom Metal with Heavy influences has returned once again to rock the foundations of Earth! And one of the finest exemplars is the band Doomshine. They’ve released their 2 full-length entitled ”The Piper at the Gates of Doom” during this summer and this particular issue is one of the major releases in 2010. The album has received some great reviews and ratings and suddenly many metal-heads focused themselves towards this German Doom act. The very same was with me, as well. 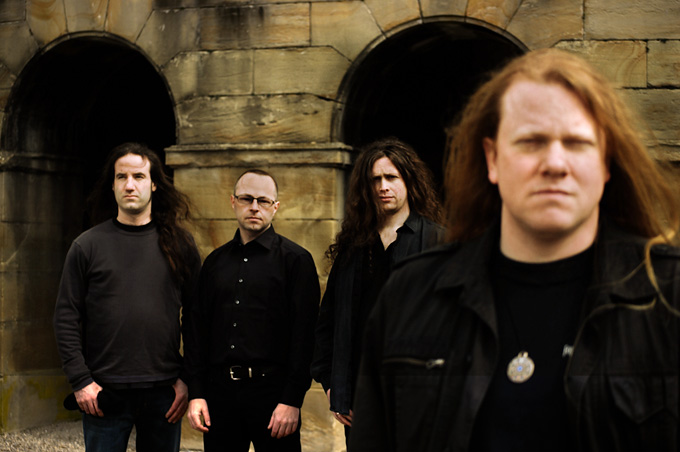 Hello! How are you doing? My congratulations for your latest record! ”The Piper at the Gates of Doom” is a really little masterpiece!
Thank you very very much. And I want to say a big sorry for answering your questions that late. I´ve been very busy the last weeks…

So, for the start of this interview please would you be so nice and tell us some words about the band and the biography?
We started under the name of Doomshine in 2002 although we were making music together since 2000. The special thing is that we are friends since nearly 20 years! Damn, our guitarist Sven and I know each other since 1988!! That`s frightening, haha. So, when we started Doomshine we recognized very early that there is a special feeling in playing melodic doom metal. We recorded “Shine On Sad Angel” in 2002 and people gave us unbelievable reactions to that song. After that everything went very quickly. We played the first Doom Shall Rise festival in 2003, we released our first vinyl single the same year, got a record deal with Iron Glory Records, released our debut “Thy Kingdoom Come” in 2004, played a lot of cool little doom and metal festivals, wrote some new songs, got a new deal with Massacre Records and here we are in 2010 with our second album.

I have already noticed that ”The Piper at the Gates of Doom” is one well-received record. You’re have finished on the 2nd place in German Rock Hard just right after infamous Blind Guardian. So, you must be really satisfied by the reaction of the media (also, i gave you 9/10:) )
Hey, you gave us 9 out of 10? That´s great, thank you! Yeah, that 2nd place in Rock Hard magazine means very much to us. I´m not the biggest Blind Guardian fan of the world but there are surely worse situations than standing behind them in one of the biggest metal magazines.

Where did you record ”The Piper at the Gates of Doom” and who was the producer? Also, who was the main composer of such a gloomy, great but yet heavy song on the album?
We recorded at our bass player Carsten´s studio and he was also the producer, he did the mixing and he´s the creator of the album artwork. The songs were made by teamwork but I think that Sven is kind of an engine when we are writing songs. All we have to do is to kick him in the ass, and then it works, haha.

How would you label the music of Doomshine? I mean, you have two important genres of metal music within your own style of playing. Your tracks are sounding both heavy but with a very strong doom-vibe.
We name our kind of music “melodic doomed metal” because it´s melodic, it´s doomed and it´s metal, haha. That´s also what we want to express with our bandname. There´s no light without shadows, there is darkness but there always will be hope. Musically we try to combine classic metal like Dio and Maiden with epic doom stuff like Solitude Aeturnus and Candlemass. We fulfill that sound with some kind of influences we get from everything we like. It´s important to us to stay open minded and to respect heavy metal in general.

It’s indeed hard to comment every single track on the album but surly some tracks are different from each others. But, some titles as surly slower ones as ”Doomshine Serenade”, while others are more even little faster for your style of playing as ”River of January”…
That´s exactly what I mean! I know there are hundreds of doom albums that are very good, but some of them are not very interesting after 30 minutes. We have to break out sometimes in Doomshine and then we create songs like “River of January” or “Actors Of The Storm”. Doom metal can give you more than some people except. On the other side we still love to put some real classic doom stuff in our songs, and that´s not only to justify our band name, haha.

Most of the tracks on the album have classic structure, but also some songs have more variations to offer. But, I guess the opening track ”Sanctuary Demon” is the best example of what the entire album is all about. This particular composition has everything within: great guitar solos, strong chorus and awesome harmonies. Do you share my point of view?
Absolutely, there´s nothing to add. If I had to choose one song of “The Piper” I would name “Sanctuary Demon”. This song is dangerous, massive and beautiful. I don´t want to praise ourselves too much, but I make an exception in that case…

If I say that Doomshine’s latest effort somehow reminds me on some doom-heavy metal acts such as Memento Mori, Solitude Aeternus or even Memory Garden would you agree with me? Ok, Memory Garden is more Power Metal band but yet with the very strong and obvious doom-vibe.
I´m very glad to hear that there are people like you who did not forget these fantastic bands. Now I know that you´re not very young anymore, haha. Honestly, Memento Mori, Solitude, Memory Garden… awesome music! That´s why I always say that the 90s are much underrated, the time when these bands had their greatest times. Also Morgana Lefay, Psychotic Waltz, Sanctuary, Tad Morose, Abstrakt Algebra and so on…

From the visual side the cover of the album looks really fantastic but also its indeed fantasy-based. So, what did you try to express with this cover? Is this cover also in connection with the lyrics?
The artwork shows to 100 % what the whole lyrics are about. The “Piper” is the conscience of mankind who are the rats that are leaving the sinking ship.

What could you also tell us about the lyrical side of the new issue? Are they also fantasy-based as it is case with the cover artwork? I have really to add that the title ”The Piper at the Gates of Doom” is a great one :)!
Thank you! As I told you the lyrics are very real unfortunately. It costs a lot of power to think about all the cruelty on our planet and I don´t know if I would do that with that strength another time. But I had to do it because the thoughts were to strong. Actually it is a concept album about the relationship of planet Earth and mankind.

What could you tell us also about your musical influences? Could you name a few bands that have some influence on you when you’re writing the music for example?
I think we named a lot of bands in this interview and everyone of them is a great influence of Doomshine. We love the classic heroes like Black Sabbath, Thin Lizzy, Judas Priest, Rush, Pink Floyd, Iron Maiden, Rainbow. And we love 80s power metal like Metal Church, Helstar, Savatage and Vicious Rumors, thrash and death metal like Slayer and Morbid Angel and of course the great bands of the 90s we told about and of course there are a lot of fantastic bands today like Nevermore… man, life isn´t long enough for all the great music…

Could you compare your newest record ”The Piper at the Gates of Doom” with your previous effort ”Thy Kingdom Come”. I have noticed that the fans really like also your previous material!
Yeah, our debut album is also very very good, buy it! Haha… it´s hard to compare because we are the same four guys today. I think the production is a bit rougher on “The Piper” and there are some more classic metal influences. But “Thy Kingdoom Come” is more beautiful somehow. Not better, but nicer, haha.

And the final question is about the possibilities for the tour. Have you any plans in this particular moment for the proper European tour?
No, really no plans for touring. I think we won´t tour in the future as we did not in the past. It´s too difficult to put ourselves together because of our jobs and families.

So, this will be the end of our first interview. I would just like to thank you at the end for your great music! Any words for the end…
Thank you so much for your interests in Doomshine. And a big sorry again for the very late answers. But hey, this is doom, isn´t it?