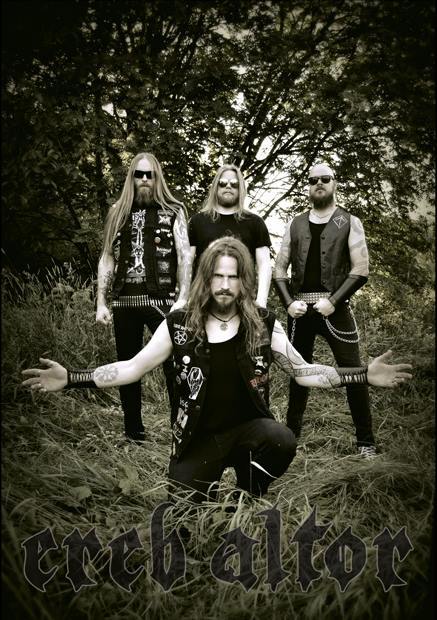 Please, could you say us something more about your forthcoming release Blot·Ilt·Taut? How did you actually decide to make one record completely made of cover songs?

At several occasions people have confronted me with the demand or the question; Why haven´t Ereb Altor recorded any Bathory covers? Many people have also said that we carry the right vibe and that we are the heirs to his legacy. Remember these words are not from me since I have no right to speak about us being the heirs of Bathory.
These demands or questions have been haunting me for some time and I was thinking: Should we do this now on his 50th birthday (yeah, I know the album will be released a little bit later than February 17th but that was beyond our control) and even more importantly how are we supposed to do this? Should we enter the sacred ground where Bathory dwells?

The answer is, YES we will enter Bathory territory and do this directly from the HEART !
It was a mix of spontaneity and planning but all I can say is that I enjoyed every minute of doing this album and it’s done in our own way with a lot of heart put into the songs

In a way it was somehow obvious choice from Ereb Altor to make a tribute to Bathory. There are songs from various albums of Bathory, how did you decide which one will go on tribute?

Since the classic album, especially the epic ones are closer to my heart we chose to do songs between the first release and Twilight of the Gods.

There are so many great songs to choose from. It’s was not the easiest of task to pick the songs, we had to adjust the selection based on favorite songs, playing time, songs that fits Ereb Altor, variety and of course we wanted to include the songs that we have performed live during the years.

Of course I had to leave out songs that I would have loved to cover due to the playing time of a vinyl as previous stated.

As a matter of fact Blot·Ilt·Taut will be released only on vinyl. Why did you make such a decision?

We wanted to do a more limited release and it was supposed to be on vinyl only from the beginning but we discussed it a bit and felt sorry for all our fans that don’t own a vinyl player. I suppose most people have internet and the album will therefore be available to all and the vinyl is perfect for all the collectors.

Where did you record Blot·Ilt·Taut? When I am the first cover I am feeling that your are ”just at home” since everything somehow sounds as regular Ereb Altor’s record.

We recorded the album in Studio Apocalypse as usual which is our own studio therefore we get kind of the same sound as on our other albums and to be honest the Bathory compositions suits our way of doing music very well so it’s no wonder that you feel that way.

Aside of Blot·Ilt·Taut, it’s time to ask about possible live dates. Do you have anything in mind right now?

We will tour Europe with Månegarm and Skyforger in March/April and we will do as many festival shows as possible this year.

Your latest effort is still very actual Nattramn so what could you say us about it? Are you satisfied by the reaction of the fans thus far?

The reaction from both media and our fans has been overwhelming. It is more worked through and has a more modern production compared to our previous albums. The songs were actual recorded twice to give us the time and chance to edit the compositions. Nattramn was the right step for us to take and I look forward to the future.