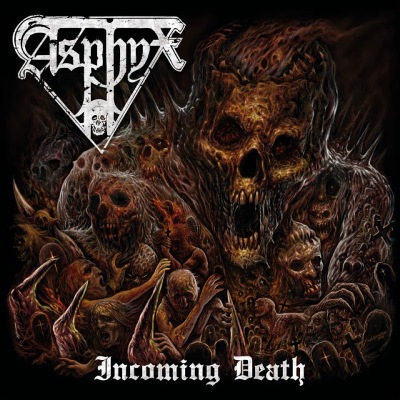 One of the originators of death doom subgenre, mighty Dutch band Asphyx, is back with their 9th studio album entitled Incoming Death to show that they have not reunited to rest on laurels, but rather that they have still some fire under their collective asses which they are willing to share with the world. Sad news came prior to release of the album: drummer Bob Bagchus had to step down from his stool due to family commitments, thus making Asphyx one band with no original members left. Personally I have no problem with that if the members have some historical role in group’s life – just take Napalm Death for the proof – so Asphyx did the same. They have invited longtime friend and fan Stefan Hüskens (better know as Tormentor from Desaster) to join the band, the man unmistakably knows what Asphyx is about and how it is supposed to sound and that can be heard from the instant the opening track Candiru starts blasting from your speakers. Asphyx is not here to reinvent the wheel, Incoming Death does not represent some huge departure in their career but it rather one more album in the vein of their previous two Death… The Brutal Way and Deathhammer. You know the drill: crushing doomy sections with wailing melodies mixed with thrashing outbursts of rage and on top of everything comes one of the best death metal singers ever Martin Van Drunen, I don’t think that them or their fans alike would want something too different anyway… What Asphyx lacks in novelty, they make up by freshness of their sound: one can simply hear some great songs here. It is clear as crystal that the Asphyx guys love what they are playing and that can be heard throughout the course of the entire album. I have to give my cmpliments here to Husky’s drumming – his primitive and up to point delivery serves the songs well sp there are no surprises in that department also. My biggest gripe with Incoming Death is actually the title track, it is not that convincing in my opinion and it sounds obvious to me that the band has tried to spawn another hymn in the vein of previous two title album’s tracks but has not succeeded that much… Luckily, other songs on the album make up for that just fine so it is safe to say that Incoming Death is one more win in the Asphyx book of doomed death metal. No compromises, no changes… just the band we all learn to love doing what they do best. Long may they live!