There is simply no stopping for Serbian epic extreme power band Númenor! Just one year after the release of their second full length Sword and Sorcery, they have unleashed the reissue of said album spiced up with a lot of bonus tracks from band’s chambers of old. Númenor’s leader Despot Marko Miranovic is here to give us the information about this issue and also to hint about the things to come, the upcoming third full album. I have heard two songs from it and I can say right away that the fans will not be disappointed as one more epic album is ahead of us! 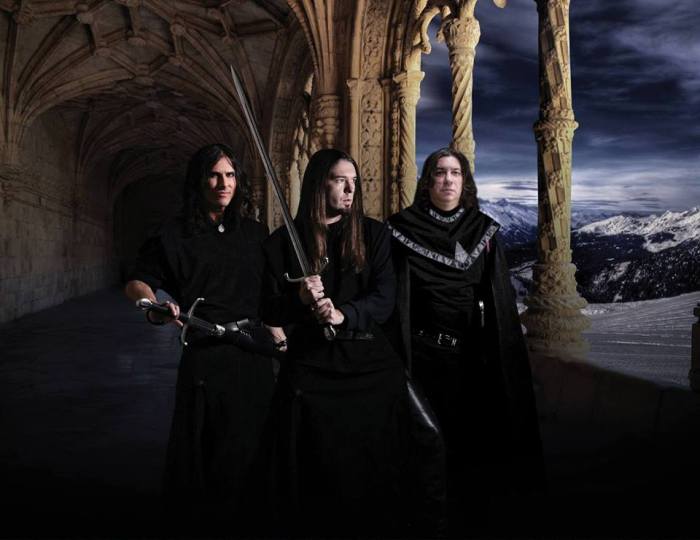 Could you tell us something about the re-release CD edition of  Númenor’s second album Sword and Sorcery?

We have just re-released our second album Sword and Sorcery for Stygian Crypt Production. This re-release comes with bonus EP Servants of Sorcery where we have gathered all material and songs that I’ve recorded from 2006-2009. So, there are five bonus tracks in all. Also, re-release CD has complete new cover artwork and booklet has also some new moments as well. It’s quite nicely done. Moreover, we have done the mixing again so I think that we’ve delivered much suitable production.

I am quite glad that I’ve finally released on CD all these old songs that I have recorded  10 years ago, it’s hard even to say that these old songs are Númenor’s ones, but nevertheless, I think that the idea to have them on CD is indeed great! I still remember the period and time when we were recording all these songs…

Why did you choose to re-master album Sword and Sorcery, any particular reason?

Probably the best idea will be to completely re-record Sword and Sorcery album since we have now much better production and real drummer so our new recordings now sounds much heavier and more vivid so to say. That was my initial idea but simply we didn’t have time to start the recording process once again so we have done the best what we could in this very moment (we have re-mastered the entire material giving the more edge to production). Also, if we ever do that, I will like to add and write two more songs. I think that, after all this, the album will sound very coherent. But, I guess that it will not happen in next few years, at least. Perhaps, one day when we will have more time.

Sword and Sorcery could become easily very important issue for Númenor. The album has already done quite well and, no doubt, it’s a milestone in our discography. I didn’t expect this, I have to be honest here. Indeed, our song Dragon of Erebor has already turned to be very popular and I am already asking myself will we be able to produce such a popular song anymore 🙂 We will see, but already from this point, we could speak about the period that we could marked as: ”The Age of Sword and Sorcery”.

Could you compare your two full-lengths? Which was more important to you?

Somehow, it’s hard to compare these two records, not only musically, but also these two albums come from different time. While Colossal Darkness was very important since it was the debut issue, everything was somehow magical around this album. When we were recording Sword and Sorcery everything turned out to be somehow different, more planned so to say. I was just counting several days before, I think that Sword and Sorcery has 2 or even 3 times more impact than the debut record and the same goes for the sales as well.

Are you preparing already a brand new record?

Yes, we are already in studio Paradox (Smederevo) and we are composing and recording new songs for the upcoming third full-length. The original plan is to have 8-9 songs. The working title is Chronicles from the Realm Beyond and we’ve already done 4 songs: Over the Mountains Cold, Into the Halls of Media, Beyond the Doors of the Night (In Habbanan Beneath the Stars) and The Last of the DragonLords. We’re also thinking to add Valhalla (Blind Guardian) as an integral part of the album so there’s a good chance that this song will appear on the new album as well. Moreover, we have already chosen that Over the Mountains Cold will be the first single so I guess that it will be published during next week or two.

Could you tell us about the style that you will have on a new album? Could you compare it will your previous records?

In a way, a new record will be different from Sword and Sorcery. The production is now much stronger which made that the songs sounds more aggressive. Also, a new record will be much more coherent and more mature. In this moment we are cooperating with Sandra (ex-Therion) and she will appear in two songs so some songs will be more orchestral and more complex. Anyhow, it seems from this point, that a brand new issue will be the best record that we have ever done. As a matter of fact Númenor has done so far several cover tracks from Blind Guardian, Therion, Summoning…

Indeed it is becoming a common thing that, from time to time, we are doing some covers, and some of the songs have become really popular. Valhalla (Blind Guardian) has turned out quite well, and we will appear on next Therion compilation with Riders of Theli. When we did Summoning cover it was the very beginning, but anyhow, I have noticed that people love this cover as well.

Any chance for a live performance, anywhere?

This question has become a common one. Since we have not played live so far we were having more time to spent in the studio. This was very important since my original goal was to record the songs and albums, to release CDs, or to upload songs on YouTube etc. This goal has been already achieved. Playing live would be the next level for us all, since we never expected to have any offerings. But, I guess, as the time pass by, that we will have more and more serious offerings that we could not miss. Never the less, we are now focused on the recording of the brand new full-length and, after that, we will see what 2017 or next years could bring.

When you are writing music and when you are recording in the studio what kind of bands do you listen?

I’m trying to be more focused on the recording process when we are in the studio. I best concentrate when I’m listening to some more relaxing tunes, I guess that Paradise Lost and Type o Negative helps me a lot during that time, their music gives me somehow calmer feeling…but, sometimes I could get an inspiration from other bands like good old Blind Guardian. I am speaking here more about the atmosphere not about direct musical, visual or lyrical impact.