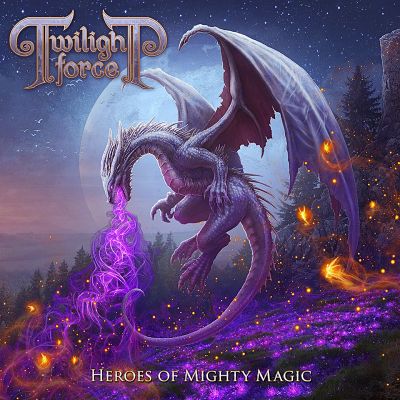 Twilight Force’s Heroes of Mighty Magic stands as one of the most prominent power metal records when it comes to power metal genre in 2016. At the very first moment, I was little sceptic about this one but, yet at the end of the day, it turned up to be indeed nice piece of work. Perhaps this is not something complete innovative, but I have to say that i like to band’s style and how they have develop symphonic, epic and fantasy moments in their style. Everything sounds so colossal and so complex. Of course, since they have signed for Nuclear Blast, they have much better position, but I think that they are taking their chance in the best possible way.

Twilight Force’s music stands a mixture of power metal with symphonic touch. If we need to compare TW’s music with some others mor prominent acts I guess that some references with Rhapsody, Helloween and alike are always welcome. But, mark my words many fans of Blind Guardian would like this band as well. Also, the fantasy moment plays a very important role as well. But, in fact, Twilight Force has continued to walk the path where mighty Rhapsody has stopped. So, this is just another fantasy and symphonic level, still very close to Rhapsody and classic power metal in general. Twilight Force’s Heroes of Mighty Magic is different from their debut record since the songs and the album are much longer and more epic so to say and yet I have to say that I like this particular moment very much. Also, the prodaction-wise the band has added some noticeable changes in their style. This time they have offered fluffiest production so the orchestrations are somehow in the front plan. The most important thing about Twilight Force style is that keyboards and orchestrations now play the leading role, while the guitars are little left in the background. But, I strongly believe that this moment in the production played a big role in the sound. Of course, one could enjoy in spectacular solos, too.

Perhaps Twilight Force’s Heroes of Mighty Magic is the most important record important record in their career. They are already touring a lot, I am very eager to see them somewhere. I hope that i will also give you one interview with Twilight Force during 2017. If you are open-minded power metal fan, and fan of melodic metal in general, you should give this band a chance. Twilight Force surly have something interesting to offer! In fact, I am indeed curious how they will develop their style in the future.