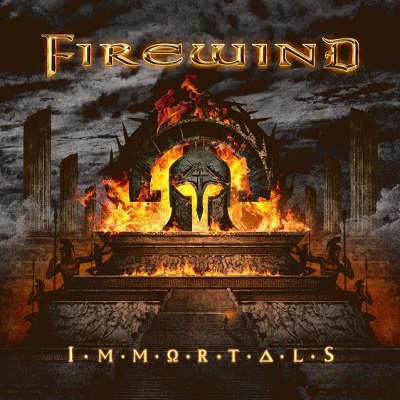 Greek power metal Firewind has returned five years after Few Against Many somehow rejuvenated and fully prepared for another successful chapter of their career. Band’s mastermind Gus G has found the time in his busy schedule to focus on his man band, and although he is active as new guitar hero in Ozzy Osbourne’s band he promised that Firewind will not suffer because of that engagement and he kept his word. Most notable change in line up is the fact that Apollo Papathanasio has permanently left the group and the new vocalist is Henning Basse, most familiar by his work with Metalium but he has also helped Firewind on the live front in the past. His strong metal vocal goes hand in hand with the musical direction of Immortals and I guess that he was chosen deliberately to do the needed task. It should be said that couple of previous albums showed a kind of modernized sound, as if the band was aiming for American market but Immortals is different story altogether. It seems to me that Gus and his gang have realized that they are primarily European power heavy metal band and music on this album shows it in spades. Here we have the complete return on the music that Firewind played on their early releases which will for sure delight the core fan base of the band since this is the music that got them fame in the first place. Opening track Hands of Time will show you immediately what I mean: strong double bass galloping rhythm and lots of melodies, like it came out straight from the golden age of power metal. The rest of the album also goes in the similar trademark Firewind style, which means tons of melodic work but without going into some soft territory and a lot of virtuoso solos. Henning has fitted like glove into the sound of the band, in his own words this is his favorite musical style and it shows in his performance. It should be also said that Immortals is conceptual album dealing with ancient Greek history, more precise battles of Thermopylae and Salamis, which is really cool since the band really has great pond of inspiration from their land and it is a pity not to use it. All in all, Firewind is back on their throne with another qualitative album of pure melodic metal so make sure to check it out.