Swedish death metallers Evocation are finally back with their fifth full length entitled The Shadow Archetype which is their first for Metal Blade. What took them so long, how the album was made and other interesting features can be found in this interview… 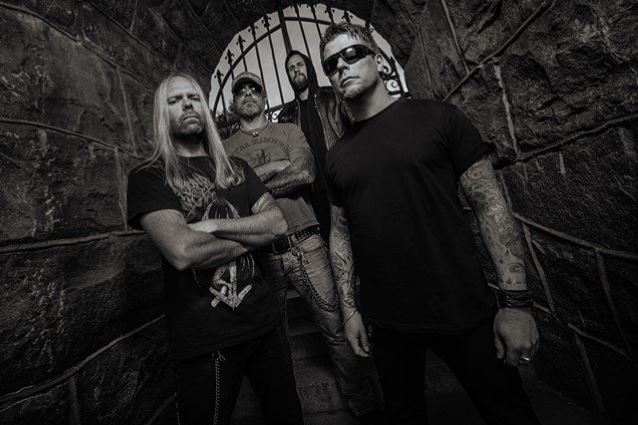 Hello Evocation and welcome to the pages of Metal Sound! How are you guys doing these days?

First off, I would like to congratulate you on your fifth full length The Shadow Archetype. How are you satisfied with the album from this perspective, is there something you would change now?

We’re very satisfied with how it turned out. Me and Marko (guitarist and founder of Evocation) spent nearly 2,5 years creating ”The Shadow Archetype”. I wouldn’t say that we would like to change anything about it, but we did go through quite a struggle while dialing in the sound for the album. A lot of trial and error, which of course we would have done differently today!

Four years have passed since we have heard something from you and in that time some significant lineup changes have hit the band. Tell us something about that period, was the future of Evocation uncertain?

Yes, original members Janne (drums) and Vesa (guitars) made the decision to leave Evocation to pursue other endeavors. They simply didn’t have the motivation to continue any more. There’s so much time invested in this band and if you can’t keep up, you’re basically out.

This of course was a hard blow to the band and Marko, Thomas and Gustaf were considering to bury the band for good, but after weeks of consideration they decided to continue. That’s where I was approached to fill Vesa’s spot as lead guitarist. I’ve known the guys in the band for quite a few years and know their music well, so it was a natural choice for them to turn to me.

You have coined a new deal with Metal Blade now, tell us something about that, and how are you satisfied with the cooperation for now?

Our contract with CENTURY MEDIA was fulfilled with the releases of the old demos, Illusions of Grandeur and Excised and Anatomized EP. Since EVOCATION was in a tricky spot with Vesa and Janne leaving the band we didn’t want to rush into a new contract. This time around we completed ”The Shadow Archetype” before approaching METAL BLADE RECORDS and signing a new record deal. METAL BLADE RECORDS are great to work with and as a matter of fact there are some really old friends of the band working there which of course makes it the perfect match for EVOCATION.

The Shadow Archetype seems to me like some musical mixture of various death metal styles Evocation has done in the past: melodic passages, traditional death metal, mid-tempo grooves… How do you view this statement, do you agree with me here?

Yes, very much. We wanted to keep the old school Evocation-feel on this album but still try to keep it fresh with inspiration from other bands we like. I think there’s a little something for everyone on this album, if you like death metal!

What was the songwriting process for The Shadow Archetype, considering that you have the new members in the band? Did they bring something new to the table?

Everyone in Evocation contributed to this album but the core of the songs were created by myself and Marko Palmén. This album wouldn’t have sounded anything like it does without the involvement of all the members. Even Per Möller Jensen (ex-The Haunted) who did session drums for the album contributed to the creative process.

Can you tell us something about the lyrical side of the album, is there some sort of concept behind The Shadow Archetype?

All the lyrics are written by our vocalist, Thomas ”Tjompe” Josefsson. “The Shadow Archetype” tackles topics that stem from his interest in control themes but also psychological issues, drug dependencies, sex, the media, or greater, more nefarious government-driven forces at play.

It was Marko’s idea to integrate Jung’s theories in the album. Marko is actually a psychologist at a prison in our hometown. He also wrote an essay on the subject when he was studying at Gothenburg University. The whole theory of “The Shadow Archetype” is based on the idea that every human has a dark side which is inherited from generation to generation and that of course definitely reflects on what is going on in the world today.

I sense some atmospheric melodies in the music which bring some extra grimness which is something that is not that present in your past, at least not in this measure. Can you give us your comments upon that?

Yes, I agree. The melancholic melodies was something that Marko worked a lot on this time around. Marko is actually from Finland and their folk music actually has a great amount of melancholic melodies, so you can say that it’s a heritage from his ancestors. And by the way, who can stand happy melodies in death metal? I sure can’t!

The album was recorded in three different studios and you have had session drummer so it seems that a lot of hard work went over it. Can you please tell us something about that experience?

EVOCATION has always recorded all full-length albums by themselves (except of drums and vocals for “Illusions of Grandeur”) and we still wanted to have this freedom this time around. Recordings are really time consuming and we all have full-time jobs, so it’s quite difficult for us to book a studio for a month or so and rush the recording.

The drums we’re recorded at CREHATE STUDIOS since neither of us have any great knowledge of recording drums and Oscar Nilsson, the owner/rec. engineer/producer of CREHATE STUDIOS is a drummer himself. His studio is also located only 45 minutes from our hometown, Borås. After the drums were recorded we started tracking guitars at our own studio, ACACIA AVENUE RECORDINGS. This was the most time consuming part of the whole album since we unfortunately felt that the guitar sound wasn’t quite there when we’d already recorded three tracks, so we had to polish the sound some more and re-record these tracks. That was a real bummer at the time but totally worth it today! Bass was also recorded at ACACIA AVENUE RECORDINGS. This recording went really smooth during 3 or 4 days in January 2016. EVOCATION’S old guitarist, Vesa helpt us to capture the right bass sound which we’re extremely grateful for!

Once guitars and bass were recorded we approached producer Daniel Bergstrand at DugOut (In Flames, Meshuggah, Dark Funeral etc.) and started the mixing and mastering of “The Shadow Archetype”. Daniel Bergstrand and Gustaf Jorde has been friends for several years and we love his previous efforts, so it was a natural choice for us to work with him!

When you look back upon your first four albums how do you feel about them now? Speaking of which, are you sorry that the band did not initially took off during the 90s, golden era for death metal?

I wasn’t a part of their back catalogue but I know that they’re proud of every release. I have actually spoken to Marko about their career in the beginning of the nineties. He actually told me that it was for the best that Evocation did get a big break since they we’re quite young and would definitely had broken up due to musical differences within the band sooner or later. Thanks to that we now have five pure death metal releases to listen to.

You have just unleashed the video for Condemned to the Grave. Can you please tell us something about the work on it?

We shot the video in the beginning of February 2017 together with Rene U Valdes from Greenworks Television at an abandoned house in Gölingstorp. The house is located about 50 kilometers from our hometown and has been abandoned since the 1960s. It has a really great horror-feel, if I may say! Gustaf Jorde, our bassist actually did the script for the video and we’re really happy with the end result.

Where can we expect to see you in the next period, are some tours or summer festivals already planned?

Unfortunately The Shadow Archetype is released a bit too late for Summer Festivals, since these are basically fully booked by now. We hope to play some indoor Festivals this Autumn and Summer Festivals in 2018! Longer tours are quite difficult for EVOCATION these days since we all have full-time jobs, but if the ”right” tour would appear we’d definitely try to get on it.

That would be all for this time, I would like to thank you for this chat and wish you all the best! The last words are yours…

We really hope that you’ll check out and enjoy our new album, ”The Shadow Archetype”. See you on the road!