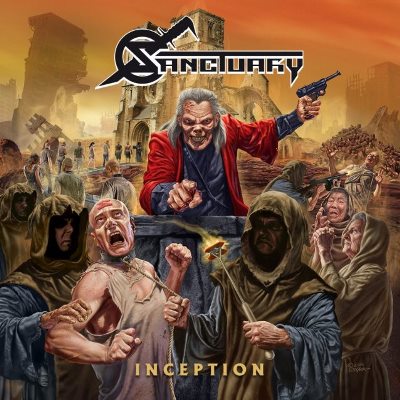 American unsung power heavy heroes Sanctuary are enjoying a bit of a resurgence lately with their 2014’s reformation album The Year the Sun Died and subsequent tours, it seems that the world gave them the praise they have always reserved but maybe did not fully receive in those turbulent grunge years. Inception has just been released and for all the fans awaiting the new studio album – do not be misguided, this is not new music but in the same time this compilation is very important part of Sanctuary’s history. Inception, as the name says, represents the very beginning of Sanctuary as it carries the old demos recorded way back in 1986 but this time in fully remastered version for your maximum pleasure. Guitarist Lenny Rutledge has found the demo tapes in his old barn, no less, and they very in bad condition; luckily band producer and Sanctuary fan himself Zeuss took interest and together with Lenny has tried and managed to save the day. After one year of remixing and remastering the stuff, Inception was ready for release and the fans are finally able to fully understand where the band was in the very beginning. Inception mainly consists of Refuge Denied material, seven out of 9 songs coming from that album but they are in rawer and should I say heavier version here. Some people have complained about Dave Mustaine production work on the original album, claiming it to took away the power of the material so those people should be satisfied with Inception since those familiar songs like Battle Angels or Die For My Sins sound livelier, one can truly hear the young band hungry to show all they have with their music. The remaining two songs are Dream of the Incubus and I am Insane, both familiar from 1986 that was circulating around the internet for years – I do not know if I am biased since I have heard Refuge Denied so many times but I feel that these two tracks are weaker than the album material. All in all, Inception is very interesting release for true fans of Sanctuary as they will be able to hear where the band came from, hear familiar songs in different versions and hear that their start was as strong as possible.