After the accident which happened in the fall of 2014 Mr.Vintersorg has finally made a comeback. I have to say that his latest issue Naturbol (2014) was quite a good record, perhaps the best that I have ver heard from his opus alongside with Odemarkens Son (1999). Since there’s around 20 years that he is around at metal scene its time to do some retrospective things and ask him something about things that has happened during the last 20 years. I still remember when I was reading his interview back then in 1999 in Ablaze Magazine when he was asking if some girls could write him letters since he lives in some distant part of Sweden 🙂 such an epic moment and story 🙂 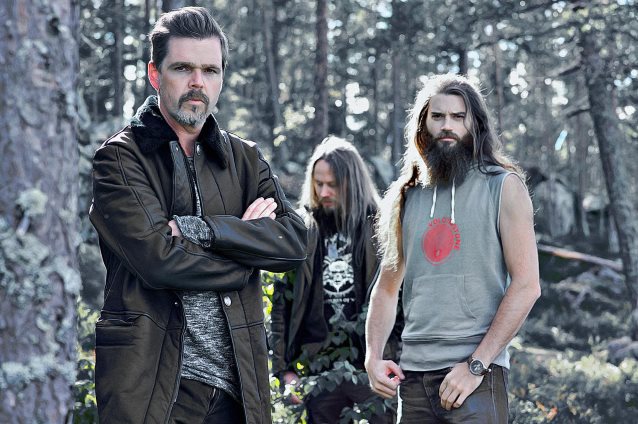 Hello there! Please, could you present your new album Till Fjalls II to our readers from your point of view?

It’s actually a sequal to our first album that I recorded 19 years ago, and the album is grand, epic and folk music oriented. I’m not a fan of sequals but this just came out of the blue actually. I was startting to write songs and they went in this kind of direction and when I listemed to the demos I was starting to feel the strong bond to our past. So, I talked to the other two guys about it and they was like: just do this! When we then decided to go in that direction it was very easy for me to write the albu and come up with tons of musical ideas that was like this. So, it was just meant to be, even if I’m not a believer of the destiny

Why did you actually want to create second part for the legendary album of yours which was released more or less 20 years ago? Is there any particular reason sentimental or artistic?

As I said it was just happening by itself. I don’t like to control my musical output with limits and frames instead I work with passion and inspiration to see where it’ll lead me, while writing the songs. When my mind took this turn it was just for me to tag along and have agreat journey while doing it. I’m very glad that we decided to go all the way with the concept and wasn’t hindered by our past, we’re very proud of the album and I think that people will really enjoy it as it has all the Vintersorg marks there is written all over it.

What could you say us about the music on new record: is it really the second part when it comes to music style of Till Fjalls or have you added some new elements?

It’s not a second part in a sense that it’s an album that sounds exactly the same, it’s more like a continuation with more experiences and new perspectives upon music and life. Still, it has the same vibe as the first album bot we’ve grown as persons and musicians for the last 19 years, so it’s not a copy with the exact same type of songs.

Also, the cover artwork for the upcoming issue reflects somehow the atmosphere from the first Till Fjalls but, yet in a new shape? Any thoughts on that?

We just have Marcelo Vasco free hands to do his thing, I just guided him with some framework of ideas and some lyrical themes to work from. Then he came up with this and we’re very pleased with the whole graphical style, it really bonds with the music and creates a wholeness that I really love. Now days the music business seems very fragmented as the album concept are under attack, people seems to by single songs here and there. I really like albums as a concept as you get so much more time, depth and width to express and explore

Between two Till Fjalls albums there are planty of Vintersorg’s record. Some of them very quiet popular other less, but what are the most important records from your own point of view?

It’s a total cliché…but all the albums are equally important to me as they all represent our musical path. The latest album is mostly the one you prefer as it’s new and fresh even to you, but I also really enjoy our first albums and also the more progressive albums we’ve done. So, I don’t have any clear fave record of ours, they all are our little babiesJ

Also, could you choose some of the best and some of the most important moments in your music career?

The most important thing in my musical life is when I understood that I could go back and create music again after my terrible accident in late 2014 when I cracked my head at seven places, two brain hemahorrages, lost my hearing on my left ear etc. It has been a long journey back for sure. Other things that has been nice is all the meetings with the audience all over the world through the years.

We did one here in Sweden last March and it was our first show in 12 years, I hope it will not take another 12 years for our next one. But honestly speaking it’s very hard for me to do it after my accident, it’s hard to really get the stage-moment to really work out well as I’ve lost so much of my hearing and it’s just though with all those injuries in my baggage, but I hope we could come out more to play further on.

As a matter of fact a brand new album is the 10th full-length from Vintersorg, so how do you feel about it? It has passed quite a lot of time since your very beginnings. Any memories from that period?

I have so many nice memories ffrom the old days and it has been this very long journey to where we are to day and where I am as a person to day also. It has been very nice times but also tough times but in the end the music has been such a huge part of who I am and has been my best friend since I was a little kid. I’m not a nostalgic person in the sense that I dream back to the past, every day has a treasure hiding within if you’re willing to explore the surroundings and develop as a human being.

Alongside with a new record Odemarkens Son will follow on LP, too. So, what could you tell us about this particular record? It was also important during the time when it was released…’

Mr V: It was our record company that though it was about time to have in on vinyl, I couldn’t agree moreJ It was the album I wrote and recorded just some months after I did “Till Fjälls”, it was at thye same studio and with the same equipment so in a way it was a twin album to the first one. I still really like it

I would like to thank you for the interview. I wish you all the best until the next time. Do you have any message for your fans that has supported Vintersong for nearly 20 years!

Just check out the new album. It has all the Vintersorg ingredients displayed all over it.