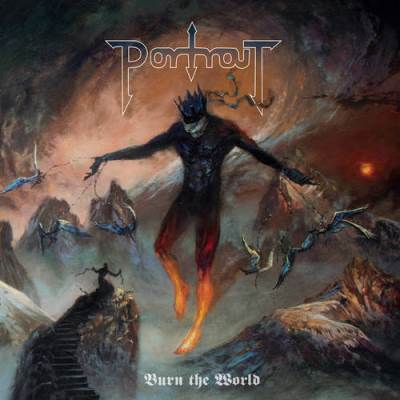 Swedish purveyors of true diabolical Heavy Metal Portrait are back with their fourth full length entitled Burn The World, three years have passed since their previous excellent album Crossroads and those of you who have already met Portrait can count on that they will now change their vision of musical art. No cheap gimmicks, no forced sing-alongs, Portrait are dealing with Heavy Metal which is as serious as heart attack and those of you who are still accusing of being mere Mercyful Fate clones are simply not listening good enough. Portrait have forged their own niche in Heavy Metal realm and Burn The World is another proof of my words. For sure one can hear influences of legendary Danes, as well as Judas Priest and other legendary bands who created this immortal genre back in the day but Portrait take those basis and filter them through their own lenses to come out with something different. Burn The World, as usual with Portrait, carries large doses of ominous feeling sometimes shockingly close to Black Metal and to enhance that statement, it should be said that Set Teitan did some guest soloing on Burn The World. Kevin Bower from British star waltz Hell also has guest spot with keyboard word so from there one can see that Burn The World is quite varied listening experience. I can also say that I feel Burn The World is slightly more aggressive than its predecessor, it gets you by the throat from the get go but without forsaking its epic side like f.ex. in tracks like Martyrs and Pure at Heart. I must admit that this side falls short comparing to songs like Lily off the Crossroads but maybe it is because I know that song by heart now, we will see how that will develop in the future. For now it is safe to say that Portrait have remained firmly on their path with Burn The World, this album will not gain them legions of fans across the globe but if you are into this subgenre check it out without hesitation.