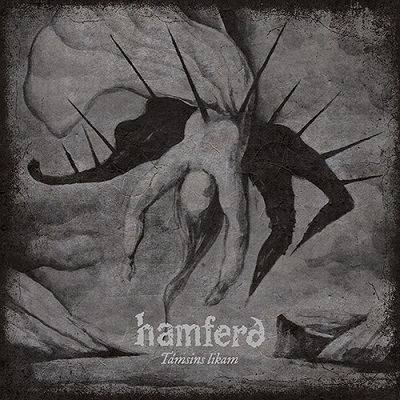 If my school knowledge serves me well, Faroe Islands is a tiny archipelago with merely 50 000 people living there – not the first place you would think of when someone mentions metal bands. On the other hand, geographical isolation probably serves as precursor to forge unique sound since there is no huge scene to adhere to and after pagan warriors Týr doom metal troop Hamferð is the next name you should write down to “must hear” list of Faroese bands. Hamferð has been lurking in the scene for some time now: I first came in contact with them when they were touring with Amorphis a few years ago, and their next step to spotlights was their singer Jón Aldará’s inclusion in Barren Earth where he masterfully sang on their 2015’s killer release On Lonely Towers. Final move that should bring Hamferð to attention of worldwide doom metal aficionados is their contract with mighty Metal Blade, and the first fruit of their collaboration is the band’s second full length entitled Támsins likam. The album (name roughly translated as “body of the mist”) is final installment of conceptual trilogy started on their debut 2010’s EP Vilst er síðsta fet, and I must say that Jón delivers all the lyrics in his mother tongue so it is hard to understand what he is singing about without detailed explanation. We should rather concentrate on what is the most important part of Támsins likam and that is the music on display here… I must note here that I am very happy that true doom is making slight comeback in the last period, so no stoner hippie bullshit or regurgitated Sabbath riffs to be found in sight – just true majestic doom sound which can lean on death metal on one side and can come to the depths of morose funeral doom on the other. Hamferð truly takes time to develop their compositions but the album clocks in mere 43 minutes which is interesting combination when it comes to this subgenre of metal in my opinion. On top of everything comes Jón with his delivery which is far more sacral comparing to his work in Barren Earth and he truly sounds like some priest which leads the procession to the final resting place. Hamferð does not truly break some new ground in doom metal territory but on the other hand the band sounds like none other, probably due the position that we have talked about earlier and the natural resources to hone their sound just like they want. Támsins likam is very good doom metal album that will rightfully push Hamferð in the next league, the place they rightfully deserve.