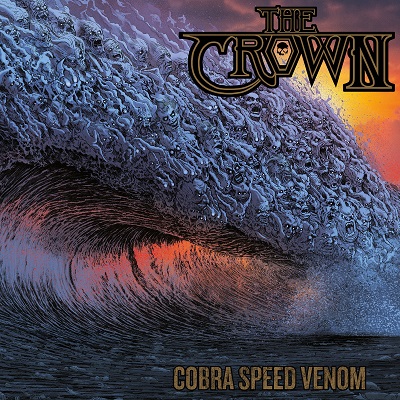 The Crown come backs with a brand new issue Venom Cobra Speed that could truly resurrects band from the ashes. Venom Cobra Speed is one of the most matured The Crown’s issues since long time. The brutality of the record, the fastness of the riffing, the fashion of massive hatred offered are the true marks of the forthcoming issue.

Alongside with Necrophobic The Crown has proved that Sweden still has killer bands that are able to slay their followers with their latest records. Comparing to latest effort of Necrophobic The Crown has delivered less melodic, but yet more brutal stuff. The music is based on slaying riffing, while in the background drum-machinery has done the deed! The drumming is brutal as one could only imagine. Also, the vocals stand to be more brutal, which perfectly goes with the music. Of course, here and there, there’s eruption of melodies even with some heaviness in the style. I guess that the songs like Venom Speed Cobra and The Iron Crown could in the best possible way present the style of VCS. The sound of a upcoming record has also dose of traditional death metal within. The production is a killer one, its not so polished as one might think, but yet there’s a raw feeling inside the guitar’s sound. Never the less, it perfectly suits the music’s style. By the way, I like the cover artwork as well; it just goes with the brutality of the music.

The Crown has passed the test: they’ve delivered one more record that their fans could adore, and moreover with this sound I think that they could attacked even more fans. What I like in their style are the straight-forward riffing without any compromises and noticeable quality of their work. If you like some brutal, aggressive and massive sound, but still with heaviness inside then just go and check out the latest issue coming from The Crown. You won’t regret a single moment!