Well, I have to admit that I am following Moonsorrow since their birth, actually since they’ve released their debut album. As the years passed by I found that I more and more liked their style, since it has become rawer, with more black metal influences. When Verisakeet (2005) was released I was pleasantly surprised and still this record echoed in my mind as the best offering from these Finns, but anyway also they later records were indeed great. Jumalten Aika, their latest offering, was issued two years ago, but we haven’t opportunity to cover the album with an interview so I used the chance to meet with Henri Sorvali (at their show)  and to have one interview. 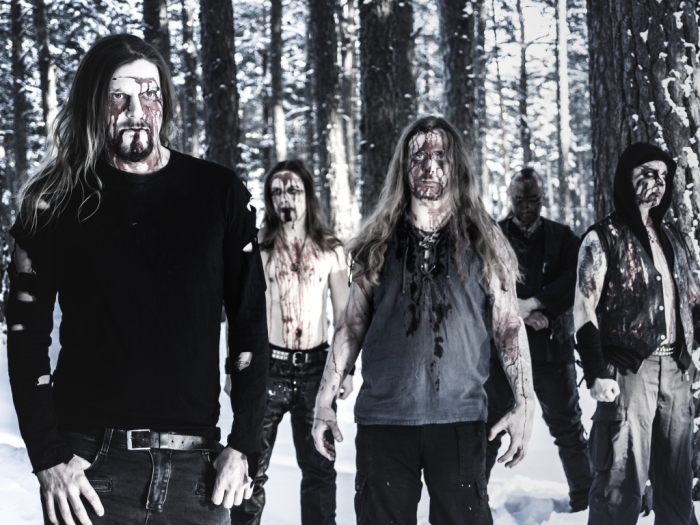 How are you satisfied with this tour so far? Where were the best shows?
Yes, I’m really satisfied. The tour has been really great so far. It makes me happy to see hundreds of people every night. The music we make is not happy, and it makes me happy that people like it (laugh).

About your latest record, it’s been two years now, how are you satisfied with the reactions and would you change anything?
Honestly, I’m totally satisfied with the album. I wouldn’t change a note, anywhere. Many people took the album as their own, they really like it. A lot of them also said that this is our best album. I couldn’t be happier. I don’t even know how much is sold, but I don’t really care. I only care if the people like it.

Could you compare it to any of the previous albums? There are some musical links.
Yes, actually, there is a lot of it. But we didn’t want to do something over and over again so we turned it into completely opposite way. We tried to do something more evil. But it’s still the music that we like and we want to play. We are folk metal band, but a lot darker, like dark folk metal not the „na na na“ stuff. I think primordial is also a folk metal band as well. They have a lot of inspiration from their home country and their traditional music.

What can you tell us about the lyrical stuff and the concept of the cover artwork? What would you like to express?
We wanted to make an album that covers the ancient myths, but instead of retelling them to make our own interpretations of them like, stories based on stories. I try to go a lot deeper to kind of find out what were the people thinking a thousand years ago and see what made them to make this stories. They didn’t have science, they had to explain everything. Every religion before Christianity had a thunder God, because that was something that you couldn’t explain. Now we know all of that, but back then they had to invent the Gods.

And your album from 2011 Varjoina kuljemme kuolleiden maassa was actually not inspired by fantasy, if I’m correct, it’s a post-apocalyptic story. What can you tell us about that album?
Yes, it’s a concept album. An album before that was already about the end of the world, so we wanted to place this one in the time after the end of the world like, what’s gonna happen when all of the people died and we only have a few people left. It’s a pure science fiction.

If I’m correct, during this period, you have recorded vocals in the woods?
Ah yes, we had a small cabin in the woods in Finland. I can’t tell you the location because it’s secret (laugh). Two previous albums are also done there, and also this one. It’s the perfect atmosphere because you can go there, only you, the record producer and Mitja with his video camera. It’s a very small group, and we do this thing together in the middle of the woods when there’s nothing around. You’d have to drive tens of kilometers to the nearest place.

When it comes to Moonsorrow, you have released 7 full -length albums in last 16 years. Can you tell us something more about how you look upon this records right now? What are the most important ones? Also there was a big pause between the last two albums so, could you tell us something about that too?
We released our second album in the same time Finntroll released their second album, and I think those two albums are the most important in folk metal. But those are the albums that I like the least, from both our and Finntroll production, but I think they are the most popular.

How do you choose your songs for the shows, since your songs are a bit longer?
Yeah, that’s always the problem when we play live, for example tonight, we’re gonna play 6 songs, and that’s 75 minutes. Doing the set-list is always very hard because when you play one song, you need to have everything around it to play that song, you can just play random 6 songs, you need to make a story. It’s like mathematics. You can create a set-list that’s 65 minutes, but that’s way too short, or 80, which is way too long.

You have filmed one video clip in Belgrade actually, how are you satisfied with it and would you like to continue making videos with Moonsorrow since this is the very first video?
Absolutely, I would do stuff with them again if I had a chance. Great people, so professional, so friendly. They we’re driving me around in free time, showing me Belgrade.

Are there any plans for the next record or have you already started making songs?
We actually just started talking about that, like a couple of weeks ago. I don’t know yet but there might be something happening. But one thing’s for sure, the next album will always be different from the previous.

You’re in Century Media for two years now, how are you satisfied with that relation and could you compare it to any previous labels?
I don’t have to lie, I really like them. When we had the meeting with them, their artist in relations at the time, he was signing us, and he told me that he was following the band from the very beginning, like, since the demo times. And I was like, wow, this is the right label for us.

What is your message to all your fans in the world that you would like to send to them?
I would really want to see all of those people at least once in my life like, we need to play in those places where we haven’t played before, like Serbia for example. We want to play everywhere because, in every corner of the world, you can find someone that likes our music, and those people deserve to see us live.