Well, Mist is a doom newcomer that comes from Slovenia a former republic of Yugoslavia 🙂 Actually, the band is indeed interesting one since it has a lot of ladies in the band. I could even compare them with band Jenner from Serbia since both bands have a sort of (International) success by playing traditional HM style. 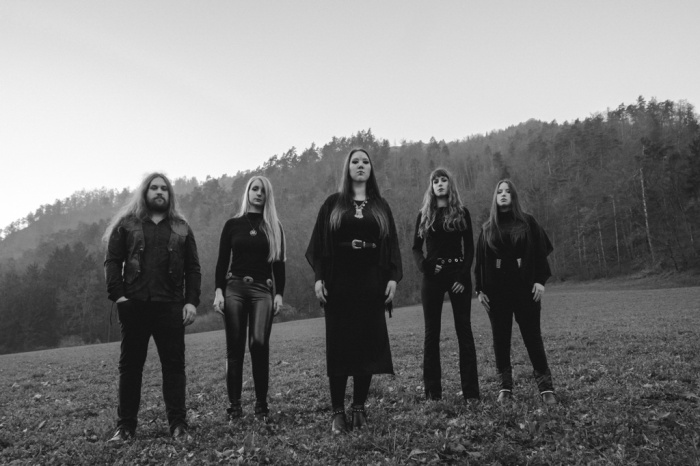 Pozdrav :)! Mist’s brand new record has been just released though Soulseller Records. Please, could you present your debut offering Free me of the Sun to readers of Metal Sound?

Pozdrav! To describe our album I would have to say it’s heavy, dark and somewhat feminine as well. Some songs like ‘December’ have been with us since 2015 whereas others for example the title thrack ‘Free Me Of The Sun’ were finished just a week before going to the studio. This is why no two songs belong together or are related in any way – we write when we feel the inspiration which means sometimes it takes just a few hours to put a song together and other times it can take months. There are ten songs on the album partly because we wanted to leave room in case one of the songs didn’t really ‘fit in’ with the vibe but in the end we felt the album would actually be incomplete if it was missing any of them so we kept them all.

How would you like to describe the sound of Mist? There are obvious traditional references in your music (old school doom elements)? Please, could you give us some references and influences on Mist’s music and style…?
Many people are wondering why our sound is traditional and why our songs are relatively short for the genre and the reason is we really don’t know any other way to write. We never think in advance about the length or the style of the songs it just comes together form the riffs that me(Ema) and Blaž write and the lyrics written by Neža or Me(Ema). We definitely have some strong influencers in our genre from classics like Black Sabbath, Pentagram, Saint Vitus and Candlemass to others including Coven, Jex Thoth, Uncle Acid and the Deadbeats, and many more.. We also have a lot of influences outside our genre because each one of us has a different taste in music so there are definitely thrash, heavy, death metal bands that also inspire us.

Since we’re not so informed about Mist as a band please could you give us some details about the band? How, why and when did you start Mist?
The band began in 2012 with Mihaela(drummer) and Nina(vocalist) meeting at a concert, where they became friends and decided to form a band. Neža (bassist) and Ema(guitarist) joined soon after and it took us a few months to figure out what direction we wanted to take. Our first lead guitarist Nina joined a bit later and together we released the Demo in 2013. When she left to focus on family life we found Blaž who has been a crucial part of the band since.

How did you sign a deal with Soulseller Records since this music company has a great resepct among the fans and followers of more extreme metal genre?
The label contacted us directly and we first re-released our 2013 Demo with them and later released th EP. We have a good relationship and get a lot of support from them so it has been a great decision to sign with Soulseller records.

Who has done the cover artwork from your latest release and what did you what to express by it? is it the same concept that you’ve used from your previous EP?
The artwork was hand drawn and painted by our talented drummer Mihaela Žitko and it conceptually reflects the title track as waves of blood and emotion drown the woman in the depths of the rest of her life as she says her farewell to the light and warmth of the sun. In the darkness she accepts the moon as a new hope in the afterlife. Whether she takes her own life or it is taken from her It is unclear but she is fully at peace with her passing.

How about the first reactions of the media and people when it comes to Mist’s debut offering Free me of the Sun? I’ve already noticed some quite good reviews and comments around…
There have been some great reviews indeed, and some not so enthusiastic as well – it comes with the territory. We love that with reading the reviews we get to experience the album from another perspective and maybe it will give us some clarity in the future. It has been amazing how much underground and mainstream media coverage we have managed to achieve thanks to our PR guy Bojan Bidovc who is also a good friend of the band. The most important thing in the end are of course our fans so we hope to have more gigs in autumn to promote the album personally. We feel that playing live is still the best way to stay in touch with the fans and the scene and it is what we love the most about being in Mist.

What is the future of Mist as a band? What are you long-time plans and what’s the next step for the group?
First we have our official release party and concert in our home town of Ljubljana where we will play our entire album live for the first time which is both exciting and terrifying! We are also releasing a music video in the near future which we are super thrilled about since it is our very first. We have a few gigs lined up this summer but with our busy schedules we plan on playing more in autumn. Considering long-term we really haven’t thought about it yet, we go where the current takes us and will see what happens.

Could you tell us little more about Slovenian scene since the band comes from Slovenia? To be honest I am not so well-informed about your scene, although you have Metal Days to offer…
It is a very small scene especially for the doom genre but it is also very cozy and all the bands know and support each other. We do have some amazing bands in other genres like Metalsteel, Eruption, Teleport, Hellsword,.. It was definitely logical to us to start playing abroad because of the limitations of Slovenia’s metal scene and by now our ratio of gigs is about 1:1 (slovenia:abroad). Metaldays is certainly a great asset to the scene and we have played both the second and the main stage already, both were amazing experiences. We all visit the festival almost every year and would recommend it to anyone who hasn’t been there yet!

I would like to thank you for the interview and I wish you all the best. Hope to see and meet  you live at stage on next Metal Days 🙂
Thank you very much for your support and interest in our band! We will all be at Metaldays this year as visitors so if you see us come and say hi – this goes out to all the readers as well!