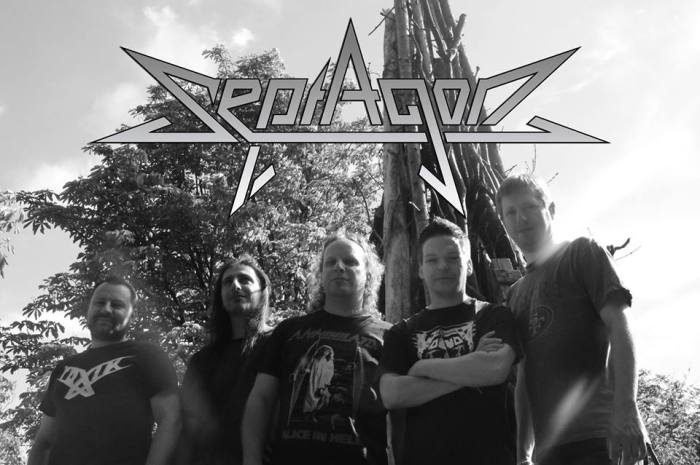 Apocalyptic Rhymes is the 2nd offering from Germany based Septagon so please could you add few words about your 2nd effort for our pages?
I think it’s a logical step. The music for the debut was written when there was not even a band. This time we actually were a band and though we’re still not a combo who writes in the rehearsal room it was more of a team effort. Our other guitar player Stef also wrote some songs and the tracks for AR simply had more time to evolve.

Also, the is the first interview that we have a chance to have with Septagon so please could you say us few words about Septagon like when and why did you started the band and who were founders?
I always wanted to write music in that kind of style and had some ideas. I knew Markus Becker for a long time and when I met him at the Keep it True festival in 2013 I asked him if he would be interested to sing something like that. He said yes, I wrote some songs, he recorded demos and then we decided that we really wanted to play the songs in a band context. We started looking for musicians and found the other guys.

Septagon’s 2nd full-length ”Apocalyptic Rhymes” is already out for sometime so could you say us few words about how people and fans has reacted to the band?
Oh, the reviews so far a are very good and we couldn’t be happier. It was released about two weeks ago and it seems the fans also like it. Didn’t hear anything negative from them so far 😀

How would you like to describe your style o playing? I mean traditional speed and thrash influences are more than obvious when it comes to your style. How about some references with soem bands as well?
I think if the guys who review the album come up with some references I’m fine with that. We listen to so many different bands that it wouldn’t really make sense for us to name just a few main influences. Or let’s say, it’s just not possible as there’s so many great stuff out there. Everybody in the band plays music for a very long time so it’s of course obvious that everybody adds something.

The same guy who did the first cover. His name is Markus Vesper, he does a lot of artwork and is also a friend of mine. We’re really happy with the ideas he came up with. We’ll continue working with him for sure. Check out his work.
http://www.markusvesper.de

What is your opinion or statement about present metal scene and so many bands coming all around? You are coming from Germany and you are already on very good label but do you think that traditional media is slowing dying and that people are more focused on YouTube or other social media tools?
Oh, I think that already happened. I’m an oldschool guy and still prefer vinyl and CDs, but I think in the future the CD will more or less die. I’m pretty sure there will always be a market for vinyl since more and more fans who collect music are into vinyl. The CD was the big thing years ago since you were able to listen to all your albums in the car. Okay, those days are gone. Probably not something we have to like or support, but we have to accept it.
Hell, even I have a Spotify account for some weeks 😀 Honestly, I wanted to hate it but have to accept that it’s actually really convenient. Of course I still buy the albums I like, but it’s a nice way to check out new stuff.

Since Septagon is still quite a newcomer for most of our readers could you say us do you have any shows in plan in near future?
Of course we want to play shows. There will be no tour, but if somebody is interested to book us: Visit our page, drop us an email and we’ll see what we can do.