Blodhemn stands as a one man band that hails from the shores of Norway so its not a surprise at all that the band is already link with some groups that also do come from Norway like Ragnarok or Taake but Invisius also explained to us that the band has some another musical influences as well. never the less, Blodhemn (or Blood Revenge if you will) is just about to release it’s 4th full-length so we took an opportunity and have one interview with it’s only member Invisius. 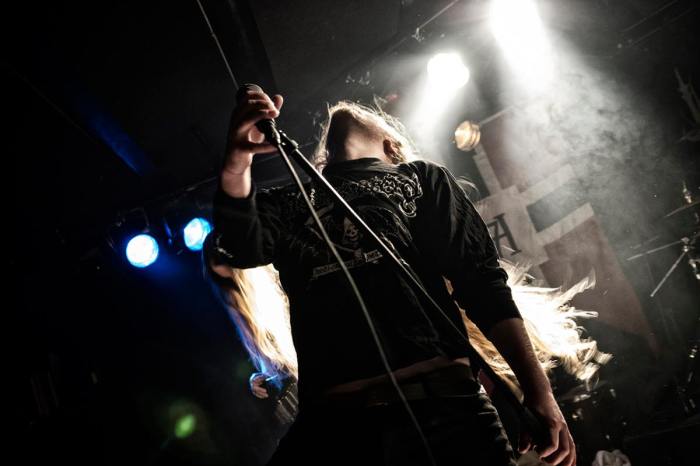 Hello Invisius! Since this is our first interview with Blodhemn please could you tell us few details about the band? Thus far you have released 3 full-lengths (including the upcoming issue)?
Yes… I started Blodhemn as a one-man-band back in 2004. Back then I was only thirteen years old and it took me some time to gather experience so the first proper demo “Logical Madness” was released early in 2008. After the release of the demo the musical style turned more towards black metal and in 2010 the EP “Brenn alle Bruer” was released. In 2012 the first full-length album “Holmengraa” was released  through Indie Recordings and was followed up by “H7” in 2014. Now the third full-lenght “Mot Ein Evig Ruin” is set for release 15.02.2019 through Soulseller Records.
Mot ein evig ruin is the title for your upcoming album so please could you tell us little more and introduce us with your forthcoming 3rd record?
“Mot Ein Evig Ruin” is a natural continuing of the previous albums, but I believe it’s still a step forward and that it has it’s separate values. I belive it’s fair to say that it’s a very angry and aggressive black/thrash album.
Could you compare Mot ein evig ruin with your previous two offerings from your own point of view?
“Mot Ein Evig Ruin” is mostly recorded in my own studio so this time around I have had more time to refine and experiment with the recordings. For example I think that the vocals got served more justice on this album. I had the chance to work alone to get it sounding as fierce and vile as I wanted.
Why there was such a long pause between Blodhemn 2nd and 3rd issue, was there any particular reason?
It was a exhausting experience to record “H7” and I did not feel inspired for a long time afterwards. When I finally got the new album (Mot Ein Evig Ruin) written, it took me 15 months to record and finalize it. There was probably many reasons for such an lengthy recording process, but much of it boils down to me doing most of the recordings myself in my own studio. There was a lot to learn as I mainly only had done demo recordings prior.
If you need to compare Blodhemn with the other Norwegian bands which one that will be? There are some certain links with Taake, Ragnarok and alike…do you agree?
There are probably some links to Taake and Ragnarok, I guess. I’m not to concious about what bands I am inspired by but in terms of riffing I have through the years been very inspired by (old) Iced Earth.
Since all the lyrics fro the upcoming record Mot ein evig ruin are written in your native tongue Norwegian could you tell us something more about the lyrical background of the latest record?
Yeah, I can do an example:
”Oestfront” is about the experiences of a fictitious soldier on the eastern front during WW2. It’s the tales of the horrendous conditions the front line soldiers on both sides had to endure. The war on the eastern front during WW2 is know as the largest military confrontation in history, and the numbers of lost of human lives was just enormous. I have been into serial killers for decades, but reading about the stuff that happened on the eastern front it really maxes out the parameters of suffering, torture, anxiety and death.
Who are the members now of Blodhemn, are you the only member or there are some more in the band right now?
Yes, I am the only member. I do all of the studio work but I have a live line-up concisting of: Anneland – lead guitar, Dan – Drums, Xarim – rythm guitar and Hauk – Bass.
Do you plan to have any live show soon with Blodhemn or are there any other invitations in Norway or abroad for the live shows?
Yes, we have a couple of shows confirmed already and there is more in planning…