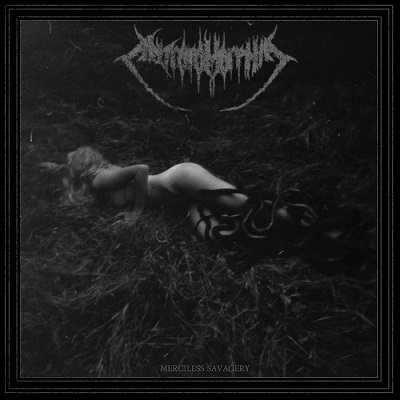 Same as Exumer, here we have the band that has reunited after the initial short run and now they are on their 3rd full length after their second start but Antropomorphia is more vile and diabolical beast that those German old thrashers. These Dutch hate mongers have always been up to creating the most evil death metal they can conjure and Merciless Savagery is certainly no exception to that rule. The album’s title could not be more appropriately chosen as Antropomorphia does not let go through the whole duration of Merciless Savagery. Their death metal is, as I have previously stated, of more evil ilk so no technical masturbation to be found in sight on these songs, no. If I could draw some parallels to their homeland’s scene it would be more striking moments from Asphyx or diabolical grinding of Sinister, with some deceptive melodies of older God Dethroned thrown in for a good measure. The only moment that could resemble of something remotely softer is guest spot of Farida Lemouchi (ex The Devil’s Blood) on Luciferian Tempest, but knowing her stance everyone will easily get that this is another crushing hymn to downfall of men. I follow Antropomorphia since their reformation and I am happy to see that they get better with each album they release next, so Merciless Savagery is no exception. It is obvious that the band members are better honed in their craft so the music comes out more in line with their devilish message, and sounds more convincing in the long run. On the other hand, I do not know the reason why the band is not more well-known on the larger scale especially with all death metal resurgence of late, but I most certainly hope Merciless Savagery will change something about that. As you have realized by now, this release will go down very well with all the lovers of extreme and dark death metal so if you are into it you are well advised to check it out!