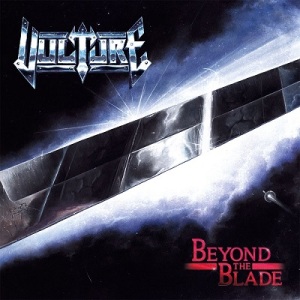 Here we have another hot signing for legendary Metal Blade, and for this time they have unearthed yet another purest metal jewel from the pits of the underground in order to get the recognition they rightfully deserve. Vulture are German thrashing speed metal troop who exploded on the scene already with their debut The Guillotine from 2017. Strike the iron while it’s hot as the old saying goes, so Metal Blade will be host for their upcoming 2nd full length entitled Ghastly Waves & Battered Graves. As the preparation for this assault of riffing mania the band is about to unleash 7’’ Beyond The Blade with two new songs. The first one is title track and it comes in now standard Vulture style which means pedal to the metal, assault with all weapons. Countless bands try to mimic the bygone era but one can easily tell fakes from true stuff, and Vulture definitely belong to the latter category. This song will shove this opinion with iron fist down your throat as it is full with high speed drums, screaming vokills and razor sharp riffing. The second number on this 7’’ is Thin Lizzy cover Killer on the Loose and for this time the tune from old rockers is Vulturized so to say, but without losing its original intent. All in all, if Beyond The Blade is indicator of what’s to come the upcoming album will be yet another triumph for Vulture, so we will wait for just a bit and hear for ourselves!