German based black metallers Darkened Nocturn Slaughtercult are finally back with their brand new effort more or less after six years of waiting. Now we have the opportunity, for the very first time, to have one interview with them and to learn more about DNS activities during their past existence… 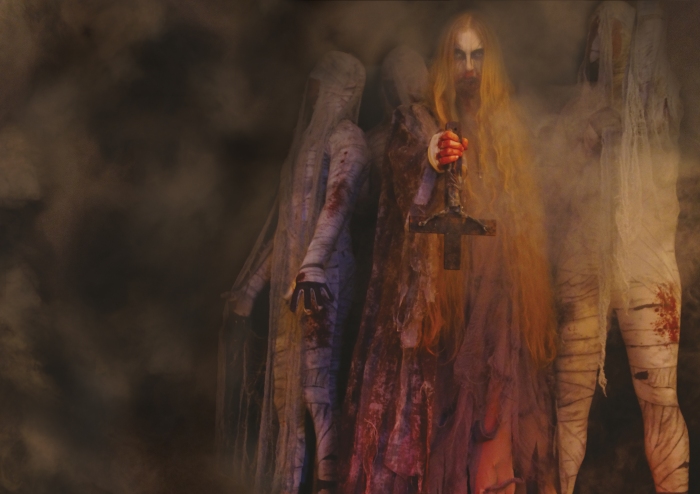 After 6 years of pause between your brand new record ”Mardom” and your previous work Darkened Nocturn Slaughtercult has once more come back with 6th full-length. So, please could you tell us first why there was such a time gap between your 5th and 6th albums?

We are all subject to the tides of life. All the heavens and hells we must wander on a daily base. The energy being drained by unfortunate events in our lives sometimes takes the upper hand, thus slowing everything else down. It is not so much important what exactly caused these struggles for power, it is of greater importance how we are dealing with it and especially how we are getting out of it. Obviously, we were able to rid off the fetters and finish the long overdue new album. Due to this long time Mardom encompasses a longer period of Slaughtercult’s works. That turned out to be very beneficial for the variety of the album.

Moreover, Darkened Nocturn Slaughtercult has finally released its 6th full-length ”Mardom” so please could you present your latest offering to our readers from your own point of view?

Oh that is certainly an easy task. If you are looking for the newest trend and hyped black metal with an oh so important attempt to invent something new within the genre, well, you will be very disappointed. Simply because that is not what D.N. Slaughtercult is about. Slaughtercult stands for old school black metal. If you are craving for mid to late nineties Scandinavian influenced black metal with an own and unique touch plus a certain rawness to it, then Mardom is definitely something for you. It is certainly our most versatile work so far, whilst still being 100% Slaughtercult.

Could you compare for example ”Mardom” with your previous offerings? Which record is musically closes to your latest offering and why?
As the new material offers much variety some tracks like T.O.W.D.A.T.H.A.B.T.E. could also have been unearthed from the Nocturnal March era. The title track Mardom – Echo Zmory relates more to the previous chapter Necrovision. Overall it is safe to say that if you enjoyed any of our previous albums you will definitely like Mardom. As always, we have stayed loyal to ourselves. We have simply taken our interpretation of old school black metal to the next level. All this means is that once again we have taken a small step forward to broaden our horizon. Adding new elements here and there, but always being aware of who we are and what we want Slaughtercult to sound like.

We’ve already noticed that there are some great reviews and comments concerning your latest material ”Mardom” so how do you feel about that?
Indeed the feedback has been overwhelming. Please don’t take the following statement as being self-regarding, but we have been around for twenty-two years so we definitely know what we are doing. Even if you are not a fan of black metal you would still have to admit that Mardom is a solid album. As we have been around for so many years, we do know how the business works. So, we are definitely grateful for all the unbiased responses we are getting from long time followers and close friends.

Once more the cover artwork reflects perfectly your style so what did you want to express this time with the visual aspect of ”Mardom”?

There are many details included in the artwork. Furthermore, in order to fully understand what Mardom is about you will also need to take the inlaycard into consideration. This already explains that obviously there are different sides involved. There are opposing forces depicted as well as accumulating, supplemental ones. There are limitation and restrictions to some elements while other entities seemingly go in out without hesitation. You will discover the known and the unknown. The comforting and the unsettling. It is all part of the concept which is expressed by Mardom. To partially quote our linernotes which are included within the 24 pages vinyl booklets: “The context can be pushed from being tangible to an ethereal one. It is a reversible process. A boundary is formal but by no means binding. A border crossing is a transformation, respectively a transmutation, a transition from one to the other. This arcanum has numerous faces. It is up to our perspective to conceive this face as a disturbing, grotesque mow or a heavenly countenance. Peregrinating the boundary is a fine line between the human abysses on one side and the consumptive flames of enlightenment on the other. May Mardom be the force to tip the scale of the balancing act from space to space, from eternity to eternity or from genuine truth to genuine truth.”

The visual side of the band was always very important to Darkened Nocturn Slaughtercult. So, what do you like and want to express by the visual side of the band such as the pormo photos of the band?
The predecessor’s images, meaning Necrovision, already showed a partial dehumanization. Mardom simply takes it one step further. To some extend this dehumanization is also to be found on the album cover. Take a closer look at the crawling travelers surpassing the spheres atmosphere. We like to put an emphasis on the album as a whole. It is not just music, lyrics, cover and photos as separate, non-relating pieces. No, instead they are pieces they fit together and add up “solving” the puzzle. The visualizations need to be eerie and discomfortable. We are putting so much effort, heart and soul into D. N. Slaughtercult that it simply demands the same attention and energy for every single element of the album. The music, the lyrics, the visualizations – they are all telling the same story.

Since Darkened Nocturn Slaughtercult has released its debut effort back in 2001, how do you feel after 6 albums and more than two decades behind the working for the band? What’s the force that keep you working after all these years?

Please note that our debut has been released in 1999. The “debut” you are referring to is “Follow the Calls for Battle”, which is the first full length album, but in our chronicle it is marked as our sophomore release. The first chapter is The Pest Called Humanity which was released as a mini CD. It has been already beyond the demo phase which we consciously skipped. How do we feel after so many years of being active in the scene? Aged. No, seriously, it feels great to have established the name within the international scene. We have already reached by far more than we have ever dared to think off. From the beginning we knew that this band would be our lifework. All of us in general are looking for a meaning in life. Some find it within their daily jobs, their family, their hobbies and so on. Whatever it is, if it based on an inner urge or an inner impulse, when it feels simply right that that is your calling. When you are unable to follow this inner impuls you are longing and yearning for the time to go back to it. That is because you are at one with yourself and your lifework. “You are in God as God is within you”. So, the force that keeps you going on is something intangible. It is often referred to as the true will.

And for the end of the interview please could you note us are there already some live dates confirmed in aim to promote a band new offering ”Mardom”?
There is one and honestly only one reliable source for information and that is our official website [www.slaughtercult.de]. We are performing at selected events. We do prefer quality over quantity. For the remaining year just a few more shows are confirmed. You will be able to see us in Switzerland (Forest Fest), Germany (Odyssey to Blasphemy, Way of Darkness) and Italy (Cult of Parthenope Fest)