Smoulder’s debut album “Times of Obscene Evil and Wild Daring” is one of the most promising debut offerings from any band in 2019. The band comes from Canada and they have variation of different traditional HM style well-crafted in their own musical structure. And since we are taking any chance to present some old school stuff on our pages we’re indeed glad to have this one as well! 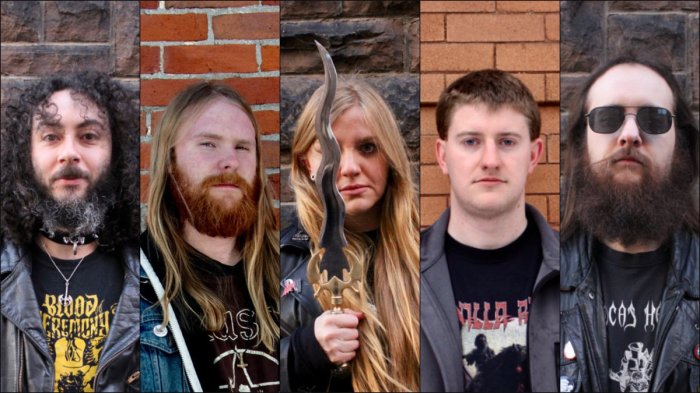 Hi there! First we would like to talk about Smoulder’s debut album “Times of Obscene Evil and Wild Daring”. Any words from your own point of view are welcome!
Adam: I think we’re all excited about the reaction the album’s receiving and thankful to everyone who’s listened to it or otherwise supported the band. I’m also really proud of my own contributions to it and looking forward to making another.

Well, second it will be welcome if you could to present the band to our reads since this is the first interview with Smoulder that we have opportunity to have so far?
Adam: Smoulder plays epic heavy / doom metal with diverse and obscure influences. We want to craft heavy riffs, haunting melodies, and epic tales that make you feel as though something from the story is there with you. Some ancient presence, awaiting its turn to speak.

Smoulder plays a sort of metal that actually was indeed popular during the 80s, very traditional, heavy, doom style. Please, tell us something more about your influences.
Vincent: It’s true some of our influence comes from the 80s via bands like Candlemass, Blind Guardian, and Manilla Road, but I think the more prominent ones are from the past 20-30 years. Bands like The Gates Of Slumber, Reverend Bizarre, and Tales Of Medusa are a huge influence on my writing.

The band comes from Canada so what could you tell us about your metal scene? Do you have any shows out there from time to time?
Adam: Great metal is made all around the globe and Canada is no exception. I’ve been to killer gigs in Toronto, Ottawa, and Montréal as well as in smaller towns throughout Ontario. I saw Bolt Thrower in London, Ontario! Plenty of tours come to the bigger cities and we I’ve been to some great festivals here, too, like Wings of Metal and Québec Deathfest. I haven’t been out West in a long time to places like Vancouver, where Covenant Festival is, but I’m sure it will happen some day.

Who has done the cover artwork for the new album and what did you what to present by it? It looks indeed very epic and old-school!
Vincent: The artwork was done by the legendary Micheal Whelan, who is likely most recognized for the covers he did for the early Elric books(Which were later used by Cirith Ungol for their album covers). We wanted the artwork to match the music and and don’t think we could have found a better image.

I have noticed that more of your member were active in some other bands before Smoulder. So, it seems that UG scene in Canada is quite vivid?
Adam: All of us have been a part of the wider metal scene for quite some time, including our members in the USA. The scene here in Canada is indeed alive and well, with good bands in every style. When it comes to traditional heavy metal and doom, I’m particularly into Manacle, Metalian, Blood Ceremony, Völur, Häxan, Possessed Steel, Starlight Ritual, Cauchemar, Freeways, Emblem, and Tales of Medusa.

What’s the future for such a band as Smoulder since ”Times of Obscene Evil and Wild Daring” is your debut offering?
Vincent: More metal, more power, and more DOOM!