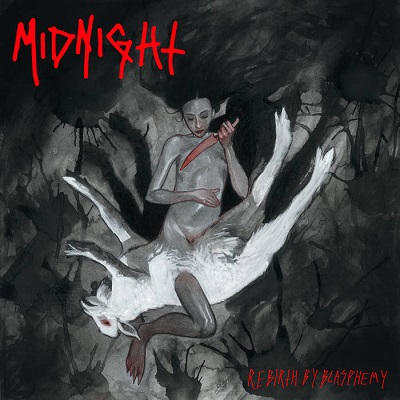 Here we have the 4th full length of Midnight, the name basically led by one and only hooded demon Athenar, and the only thing that has changed in his world is the new label. Everything else is basically just the same good old sleazy Midnight people grew to love years ago so if you are already acquainted with this name you might as well stop reading this scribble here and now. I do not understand foul cries of underground warriors that Athenar has lost it somewhere around debut album Satanic Royalty – sure, we all were bedazzled by old EPs chock full of tender hits such as White Hot Fire, Endless Slut or All Hail Hell but Midnight has always kept the level of quality intact in my opinion. Guess this is the ‘’only demo is real’’ mentality, or simply people enjoy the stuff they have first encountered most but Athenar has been churning those catchy scorchers throughout the course of his entire career. Rebirth by Blasphemy is no exception to that rule, and I even think that this time Athenar has somehow upped the ante in catchiness factor without sacrificing his trademark sound. Just take the opener Fucking Speed and Darkness (title tells you everything you need to know about this one, really) or Rising Scum, which is slightly unusual number in Midnight’s discography with its hymnal approach similar to Take on the World by Priest, and you will instantly understand about what I am talking about. As I have already stated, the music is in well-known Athenar’s vein which means mixing speed thrash, heavy metal and punk into one cohesive whole which is short, pissed and ready to explode in any given moment. To conclude, I really do hope that Metal Blade have the power to push Midnight further in their career, since the philosophy of the band was clearly kept intact and they really have the chops to become heroes on a larger scale. If not, Athenar will be satisfied with his midnight queens in dirtiest gutters anyway.