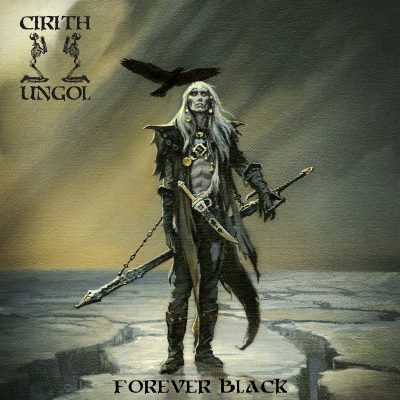 After 3 decades of waiting we are having finally a chance to listen some brand new material from Cirith Ungol. Many things has changed during last 3 decades not only in heavy metal, but in many other musical styles, but what’s has happened with Cirith Ungol? More or less, when it comes to their style of sound nothing so huge, but the band has become more popular and prominent and more important in HM genre. So, I guess that today people are counting Cirith Ungol as one of the most important bands in the genre of so called traditional heavy metal bands. Of course, we could not count here bands like Sabaton or Nightwish since I guess we could make a link between Cirith Ungol and Hawkwind for example but not with these aforementioned bands. It will be very hard, anyway.

Anyhow, as we speak about a brand new offering Forever Black we could say that a band new offering is a neutral step of what the band has done with their Paradise Lost album (1991) . It’s always a question who is listening or reviewing a record, but anyway we could say further more that this is so far the most develop record from Cirith Ungol, as it was the case particular observing with Paradise Lost album at that time. Of course, we one thing is for sure this is the most important record in this particular year. They have develop their style from 1980 until 2020 that’s for sure. The sound and the structure of the song have become more vivid so to say. Of course, we have the opening title Legion Arise as the best exemplar here, but also there are some other tracks that could mark the development of their sound like Stormbringer. I am quite sure that I have few highlights on this particular offering like the oping Legion Arise or more ballad like Stormbringer, or the closing one Forever Black (the song has such a epic sound for the closing of one good record). I think that these 3 titles are the perfect example of how the sound of Cirith Ungol has develop throughout all these years. But, in between we could also track some songs that are closer to their earlier recordings and albums. It depends from a song to song, but if you are into CU’s discography you are quite aware of what I am talking about. So, Forever Black LP is heavier, more aggressive and massive offering. We are speaking here about the most epic and colossal record in 2020: I am quite sure about that.

I just have to say few words about the cover artwork: to me its a perfect one so I cannot wait to have it on LP. I always adore these old-fashioned covers and to have Elric of a cover its always a perfect. Moreover, the cover artwork just perfectly goes with the music and the title as well which is also quite important.

I was attending to visit Keep it True this year and I was indeed so eager to see Cirith Ungol two nights. But, it seems that we will need to wit for autumn or for the next year, we will see until then we are having a new stuff. Stay calm, stay black!