Finnish metal giants Amorphis have continued their relentless pace of releasing the masterpieces that have started ever since Tomi Joutsen joined and saved the band from slight fall of popularity; „The Beginning of Times“ is their 10th studio album overall, and in 5 years they have released four full lengths, DVD and compilation which is quite a feat when you have in mind the quality on display. I ahve already gave the new album a perfect 10 score in my review, it will be the best album of 2011 for me and all that is left is to guest Niclas Etelävuori, bass player of Amorphis, to give us all the answers we need. 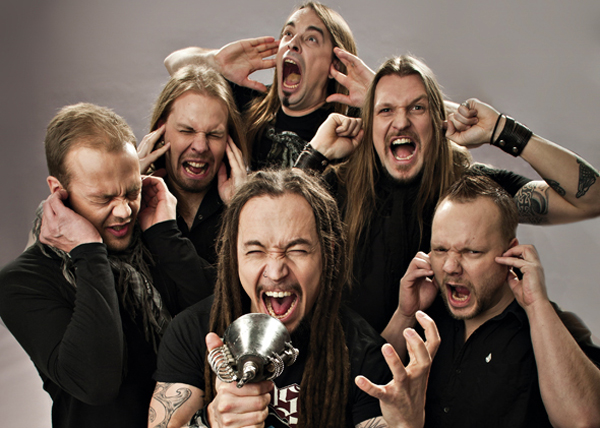 Greetings, Amorphis! What’s up guys, how are you doing these days?
We are waiting for the festival season to begin, this year and next will be a lot of touring for us. Last weekend we performed new songs for the first time, it was a lot of fun. Can’t wait to play more.

The main reason for this interview is, of course your new album “The Beginning Of Times“ so I would like to congratulate you on yet another masterpiece! How do you feel about the final outcome of it?
I”m very happy with it, I think we managed to make it one louder that last one. As long as we can do that I’m happy.

Your previous one „Skyforger“ was very successful, did it place some sort of pressure on your back or you were totally relaxed?
We had a lot of material to work on so I guess it could have gone many ways. But in the end I think the songs that represent the band’s best ended up on the album. We were quite relaxed about it, we knew where we could do better and we did. We recorded it over 3 different periods and toured in between so there was a lot of time to think about the songs.

I have to notice one strange thing – Amorphis is truly legendary band, yet it seems to me you have reached the highest amount of success in the last few years, why do you think that happened? By the way, which album from you catalogue sold the most?
We have now a unit that is motivated and hard working. Tomi Joutsen brought a lot to the band besides his voice too, he is a hard working man. I think also because the line up has been stable since Eclipse it’s been easier because year by year we get to know each other better as persons and players. I think unitwise still Tales or Elegy because they were released when albums still where selling. I think Skyforger might be there too if it was released in that era.

OK, let’s go back to „The Beginning Of Times“, I would say that the album is a bit different from its predecessors, so how would you describe the musical direction of it?
We took things a bit further than on Skyforger musically and production wise. There’s the hard parts and the soft parts but also more odd and melodic. I think the overall sound is punchier than before, we had a bit more time to mix and master so we could choose from different versions.

The one thing that is always interesting about the Amorphis albums is the lyrical concept and this time you went for the story about the beginning of time. Can you please explain it to our readers, and also tell us who was the responsible for the lyrics?
The lyric are based on poems by Pekka Kaunilainen who based his on the Kalevala. The album is about the Beginning of Times story and Väinämöinen who is the main caracter in the whole epic. The lyrics have then been translated to english and Tomi Joutsen and Marco Hietala have arranged them to the music.

One novelty in your music is the prominent use of female back vocals. Who has done them and how did you decide to enlist that new feature?
There’s been a bit previously too but not as audiable. On Beginning of Times they are sang by Netta Dahlberg, she has a solo career and sings on a lot of backing voclas for finnish artists.

Through the bigger part of your career your albums featured 10 songs but „The Beginning Of Times“ enlists 12 of them making it the longest one in your discography, along with „Elegy“, can you comment on that?
We had so much stuff written and we already dropped 4 songs so we thought we’ll put the rest on the album.

While we’re at it, I was listening to the album with my friend who is also a fan and we have agreed that the new one carries a large dose of „Elegy“ vibe, with some „Silent waters“ emotions here and there. Can you comment on that?
I think the album is a result of what we are as a band, of course there will be vibes from the past, this is after all the 10th studio album for us.

This album also marks large inclusion of folk motifs you became so well known for in the past, how did you decide to put them back in the front?
In some songs we went for it all the way to make it sound more authentic. In some other songs they go through a metal prosessor.

On digipack we will find bonus „Heart’s song“, so I am interested to know why do you always put the best songs as bonuses?
There’s always a request for bonus songs for different releases. It’s just the song for us that doesn’t fit in with the concept as well as others.

Who was responsible for the composing duties this time, are Esa and Santeri mainly in charge this time again?
Yes, there’s two songs by Tomi Koivusaari too.

The last four albums all use the similar style that you have enlisted since Tomi has joined the band, will we see Amorphis going in some completely different direction in the future?
You never know. I think we will always just be Amorphis but every time we can improve on some things.

Four albums in five years – that is quite an accomplishment, so from where does that sort of inspiration come from?
I guess everyone is writing some music all the time so when it comes to start working on next album the stuff is already there, we just need to rehearse and work on it a a bit. That’s just the kind of people we are, if we have free time we have other projects.

2010 was the year when you have celebrated you 20th birthday, which is quite a feat. What could you note as the proudest moment in your career, and on the other hand – what moments were the worst?
When I joined the band in the year 2000 the morale was pretty low actually I wasn’t even sure if it would last. Since then it’s improved day by day and nowadays I would say it pretty damn high. So I guess coming from there back to where we are now is the high point for me.

I have seen the gig in Budapest with Orphaned Land and Ghost Brigade so please can you look back on that tour?
Budapest was a good show and so was the whole tour. It was the second tour in Europe with Skyforger so we didn’t expect the turnout to be as good as on the first one but actually it was better. So every one was happy.

While we’re at it, can you tell us who are the best bands you have toured with?
In my time we tour with many great bands as Moonspell, Children Of Bodom, Opeth and many more. We get along well with all of them and it’s always great to meet or even tour again. With C.O.B. we are going to Japan and Taiwan in June.

Do you personally miss the nineties’ era of metal when bands like you, Samael, Katatonia, Moonspell, Tiamat, The Gathering… weren’t afraid to exeriment and create something completely new?
When a band is still new they experiment until they find their sound, then it’s just about perfecting that sound. I don’t think it’s a bad thing. If you need to experiment it’s better to start a new band. All the great bands you recognize right away because they’ve created their own style and sound.

Let’s be honest – „Tales from the thousand lakes“ was really visionary album, it did put Finland on the metal map and was the cradle of some new genres. Do you think that Amorphis should get a lot more credit for that?
All the credit is good I guess. It is a unique album and it opened a lot of doors, for Finnish bands and for others that you could do death metal in a entierly new way.

How do you react when people say that the only good Amorphis albums are the first three ones? Do you think that they have completely missed the point of the band?
Some people like to get stuck in the past, that’s fine with me but maybe they should give something new a chance some day. It would have been impossible for us to do that over and over again for the last 20 years.

How did you like Barren Earth’s debut album that enlists some ex-Amorphis members?
It’s a great album, I really like it. All of the guys are our friends since way back in time.

Some extensive touring is about to follow, so please can you tell us where can we expect to see Amorphis in the next period? Are the bands that will follow you on tour already chosen?
Not yet. Actually we were hoping to get Barren Earth but they had other comitments.

Allright that would be all for now, I would like to thank you and wish you all the best! Your last message for the fans…
Thank you for the support. I hope we will see you on the tour.