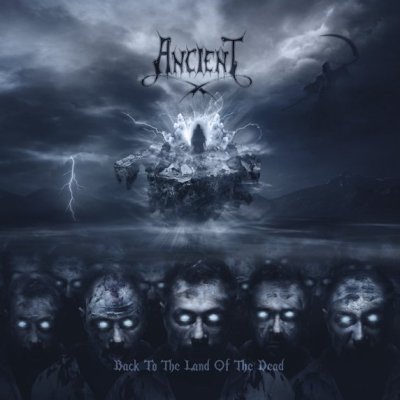 Here we have the return album of Ancient, Norwegian act whose career in 90s very accurately embodies movements on black metal scene in that age. Starting as raw and primitive unit, Ancient has soon transformed into melodic black metal band whose music was filled with keyboards, female vocals and vampiric themes. Add to it over the top videos such as Lilith’s Embrace and Willothewisp and you have one group that was symbol for the particular era, right along Cradle of Filth and Dimmu Borgir. Spat upon by many and praised by others, yet Ancient under the lead by Aphazel stubbornly have marched on until 2004’s Night Visit after which came total silence. Aphazel (who have converted to Christianity and shortened his nick to Zel) has proclaimed that he was simply tired of the band, so the line up slowly fell apart. But something started to move in the shadows when Zel and his trustworthy companion Dhilorz met legendary drummer Nick Barker so Ancient was finally back on track and ready to roll once again. After years of waiting and delays we finally have their 7th full length aptly titled Back To The Land Of The Dead to show us if there still is some fire in the old corpse. And I can easily say – yes, there is! Ancient seems to pay zero attention to what is going on today’s metal scene and marches on their path of melodic black metal without distraction, bringing to us one album that will warm the hearts of us old farts who still yearn for bygone period with all its flaws and good sides. It should be said that the presence of Nick Barker is clearly felt here as this is the fastest and most brutal Ancient’s album up to date. There is no use for someone like him to play slow as the music’s composers Zel and Dhilorz have wisely understood so the album is filled with fantastic blastbeat work and on the other hand a lot of grim melodic passages. I must admit that I have expected total disaster from this album due to the fact the band was on such a long break and Zel changed his life views but I am glad that I was proven wrong. Back To The Land Of The Dead is one good comeback album that in the same time reminded me of those times that are largely ignored today, it is not masterpiece by any means but it serves its purpose and if this is some indication of new winds and retro trends on metal scene I will welcome it…. There is always place for some nice melodic black metal, if you ask me.