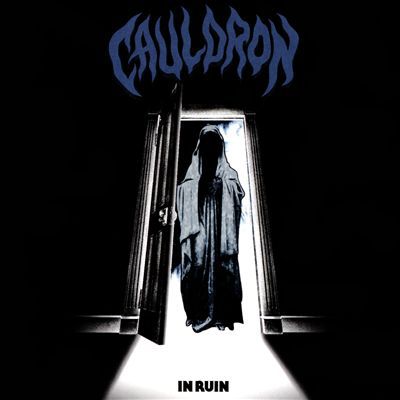 Canadian heavy metal trio Cauldron are back after four years with their fourth full length entitled In Ruin proving that they are not trendy band that was destined to play for one season when this revival was cool, but rather a force to be reckoned with and already very serious band doing this distinctive style of music. Their episode with Earache and now they have found dedicated label that is here to back them up so it seems to me that Cauldron are really on fire, playing here like they have something to prove and that is obvious from the moment you press Play and start to listen to this album. You probably remember that in the beginning Cauldron were victims of accusations that they are gimmick band due to song titles like Chained Up In Chains or their image, but In Ruin deletes those notions swiftly. One can hear that this album is much more morose and serious, the whole atmosphere is dark and it really takes me back to glorious 80s times. Speaking of which, I have just said that the album carries the 80s sound but I cannot put my finger on one band that sounds exactly like In Ruin: one can hear usual suspects like Maiden or Priest, also the efficient riffing of Saxon and Aceept all the way to darker realms of heavy metal and band such as Angel Witch. Thus another notion about Cauldron, that they are NWOBHM rip off band, goes away just like that as it is clear that this has nothing to do with the state of things – Cauldron have their own little niche in heavy metal. The arrangements are not complicated at all, riffs get the point across, I have the problem as always with the vocals of Jason as I feel that they are a bit thin but that’s just his standard delivery. All in all, In Ruin is another good release from Cauldron, the one that simultaneously continues their pace and in the same proves once and for all that we are dealing here with strong force that is here to stay.