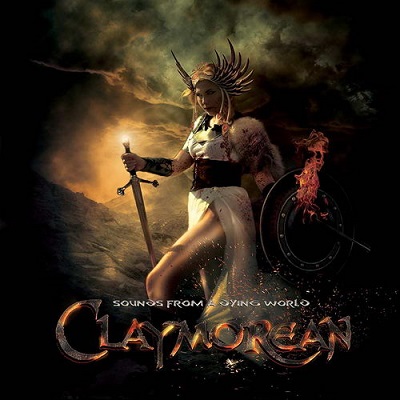 Claymorean’s Sounds From a Dying World presents a brand new form of a sound coming from this (veteran) Serbian troop. As a matter of fact their upcoming effort, which will be released soon for Stormspell Records, is their best and the most mature work so far. Moreover, I could admit that it’s one of the best recorded releases that has ever arrived from Serbia.

Sounds From a Dying World presents Claymorean in the best possible way! When I was checking their brand new effort I could not believe how the band has made such a progression in their style. Their previous record(s) were much more in classic power metal with strong (not opera-like) vocals. But, this time the band has made the change, the songs have become slower, riffing stronger, atmosphere grimmer, more epic…so the final product sounds just perfect! Some songs like Cimmeria are beyond any words. But, anyway, what we’re facing here, right now, it’s a sort of traditional epic doom heavy metal with catchy, epic choruses. Also, there’s an obvious classical power metal vibe within that brings more melodic side to the songs and the entire record. Some songs are slower, some faster, but it does not matter, as long as they are well-packaged, produced and composed. The production also plays a great role here, since it has been done in the best possible way, being very strong, edgy and aggressive at the same time. After all, I guess that the guitar-riffing plays the most important part bringing some more ancient and old-school details to the well-shaped style.

As a matter of fact I have many favorites among the songs from a forthcoming full-length. Cimmeria and Rage of the White Wolf have the epic and the most catchy choruses, while songs like Old Mountain or The Final Journey sounds more embraced in the doom-vibe.

I guess that all those lovers of good-old traditional epic doom or classic power metal should check out Claymorean’s Sounds From a Dying World. I could go even further and just mentioned some bands as Manowar, Candlemass, Cirith Ungol that could suit for the right reference here. Anyway, strongly recommended record!