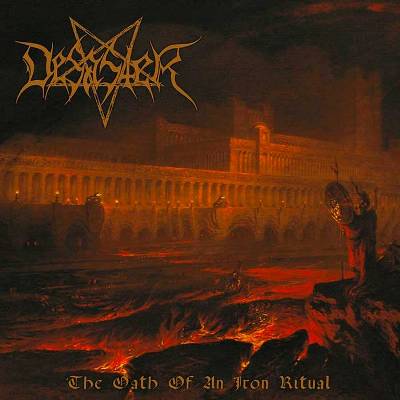 There are some things in life that will never change, there are some bands that will never alter their vision. Among them are surely Teutonic black thrashing overlords Desaster who are back this year for another lesson in violence entitled The Oath of an Iron Ritual. If you have ever been fool enough to fear that Desaster will embrace some new tendencies in search for quick buck can freely erase those thoughts, as this band is iron willed as ever as their 8th studio album firmly shows. So I can easily say that there are no surprises with The Oath of an Iron Ritual, but who would want it any other way? The Oath of an Iron Ritual is, as I have said, black thrash metal in tried and true Desaster way and if I have to compare it to their previous album, 2012’s The Arts of Destruction, I would say that the new one is slightly cleaner in sound department but everything else is the same. Large outbursts of black metal attack that have returned on Desaster’s last two albums exchange easily with thrash metal headbanging sections, and on top of everything comes venomous Sataniac’s rasp who is sounding better and better with the passing of time if you ask me. Front cover is painting of J. Martin inspired by novel Paradise Lost and although it looks cool, it has already been used by couple of bands which is slight minus in my eyes as Desaster has always had cool drawn covers. I think that I will position this album in their discography with the passing of time since the songs need some time to sink in but anyway I am not disappointed. Desaster have stayed at the front line of black thrash scene and together with Destroyer 666 they are still cream of the crop when it comes to this sound.