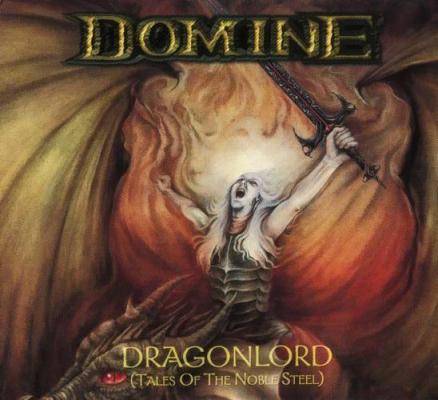 Dragonlord or Tales of the Nobel Steele (1999) stands ae one of the best records ever released by Italian band Domine. As a matter of fact this was their second full-length, the album that has made this band more known to the metal scene. Many melodic metal fans consider Domine as a sort of the answer to Rhapsody, but the truth is quite different.

In fact, the style of Domine is more based on strong guitar riffing, with less keyboards (sometimes keys are completely missing). From my humble opinion this band could stand hand in hand with mighty Rhapsody since they have their own style and their own qualities. They have very strong mid-tempo written songs like Last of the Dragonlords or The Ship of the Lost Souls. I would say that these hymns are the best part of their style, but also faster, hymn-like tracks like Thunderstorm plays a huge role in their music. Domine‘s music stands as a unique mixture between Manowar and Rhapsody, but also you need always to keep in mind that they have their own touch just like Virgin Steele for example. Their music is very epic, bombastic, with dramatic feeling. They have based their lyrical background completely on fantasy based lyrics and the Elric saga plays definitely the biggest role! Later, they will also explore some other territories as well but we could say that Dragonlord is Elric’s album 🙂 Well, just take a look on that marvelous cover artwork!

Domine’s Dragonlord is very unique piece of work and what it was released, during the late 90s, it was perfect time since this style has become quite popular. I could say that Domine stands hand in hand with acts like Virgin Steele. More devoted (true) lovers of heavy metal will always remember these bands no matter if the style is popular or not! I consider Dragonlord as a brilliant album, a true masterpiece when it comes to traditional heavy metal.