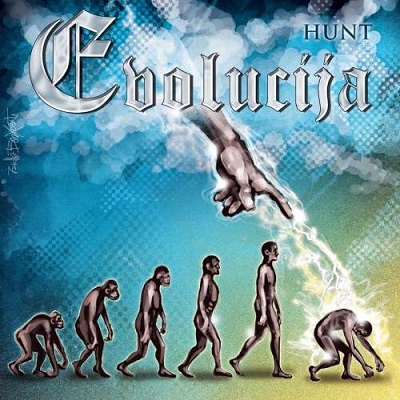 This is the first CD that I have a chance to check out from Serbian-based band Evolucija (Evolution). Thus far the band has issued three offerings and the latest one ”Hunt” comes from 2018 while the debut record was published during 2007. It seems that the band has began to be more active during last two or three previous years since they’ve published two full-lengths during this period. Anyway, Evolucija performs music that could be easiest labeled as Gothic metal with various traditional or heavy metal moments. There have been several bands on Serbian scene before with less success. Actually, any of these female fronted bands did not make any significant impact beyond Serbian boarders. As far as I could recall there was Moondive (more then 15 years ago), or later there was Demist. Both bands trying to copy Finish style of metal closer to Nightwish or a like. I have tried to find some more details about Moondive but it seems that the band has issued just one full-length, while Demist also has issued one Digital record some 4 years back. So, it seems that Evolucija is the only active band from Serbia with more serious impact beyond our boarders with Goth-metal sound. But, also we need to add that the members are older and more serious comparing to these two aforementioned bands and that the sound of Evolucija is much stronger, better produced and heavier comparing to Demist or Moondive. The band has also released their 3rd full-length though German label Pure Steel Publishing which is indeed little weird since Pure Steel is well-known by publishing more traditional oriented bands. As far as I could see Evolucija is not directly influenced by Finish hype, rather they have their style rooted in much stronger elements so I will compare them with original Gothic metal bands, not with the later Nightwish hype.

The riffs play here the main role, while the female vocals are offering the leading melodies. We’ll see what Evolucija will deliver in the future but Dragisa and co. are older and more serious persons so I guess that they’ll continue to deliver the records, but the first step has been made and the band is already recognized much beyond Serbian scene…