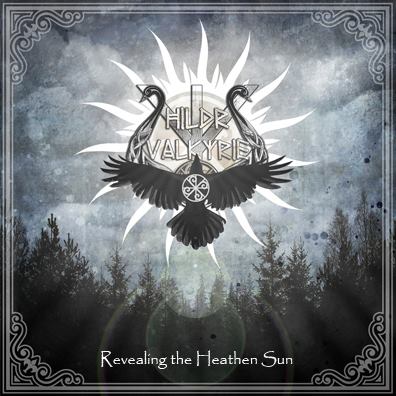 I have to say that this is my first encounter with Hildr Valkyrie since I’ve not a chance to check out the band before. Of course, by the name of the band and by the name of the record its not so hard to guess that we are dealing here with something pagan based but when it comes to this one-(wo)man-project there’s actually lots of things happening since there are obviously some pagan metal basics mixture here and there with some traditional heavy metal guitar’s work.

Its quite easy actually if we go and compare Hildr Valkyrie with Falkenbach or Taunusheim and a like for example but that’s not the entire story. The main and only member of the band is female so the things are quite different here.  She has composed all the music and, more or less, played all the instruments. Also, the music contains both sort of vocals growls and clean ones. And if we have in mind that these are female one this makes situation even more specific so to say. So, yes we could go even further and so that Hildr Valkyrie is quite different band from others and that she has picked up various influences from various pagan metal bands Arkona, Faklkenbach, but with some edgy heaviness in her work as well.

So, the final product entitled Revealing the Heathen Sun sounds quite interesting piece of work especially if you are into those sort of pagan folk metal bands since this one is little more unusual stuff which is in my opinion more of a positive thing. And just few more things here are need to be mentioned: the band comes from Greece and this is her second offering.