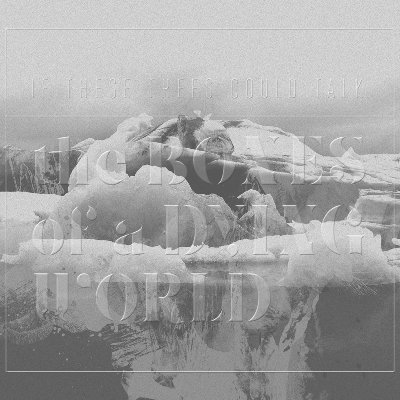 Even though Metal Blade is well known for being one of the oldest and most respected metal labels in the world, they like to throw curveball here and there at us to show that they are growing beyond their preconceived realms with their respectable roster. Good proof for these words would be their signing of instrumental post rock band If These Trees Could Talk who got well known in the scene with their first two albums which were re-released by Metal Blade as first fruit of their collaboration. Now the time has come for the band’s third full length entitled The Bones of a Dying World, and it remains to be seen how ITTCT will be appreciated among the metal population to which Metal Blade will expose them. I can predict that more open minded among them will have no problems to embrace The Bones of a Dying World as the album features suiting dose of heaviness to cater that crowd but it would be wrong to pigeonhole this album like that. Sure, one could label ITTCT as post rock and it would be the easy way out as the band features a lot of characteristics of that subgenre but one could find something more here. The Bones of a Dying World employs a lot of loud/quiet dynamic exchanges, but they are not used in typical manner but rather more unpredictable way so you will have nice time following all those changes. It should be said that the band has three guitar players among their ranks that enrich the music with a lot of melodies; it may sound like a cliché but really the best way to experience The Bones of a Dying World is to simply lay down, concentrate and let the music enter your mind without any distractions. The music is highly atmospheric and it also moves like a living organism so you won’t feel that the arrangements are contrived – ITTCT are just playing what is naturally coming out of them. The Bones of a Dying World is very interesting and inspiring album that could be appreciated even by people like me who have just a passing interest in post rock genre, so all the people into similar stuff can check out this release without hesitation.