Long running German hard metallers Mad Max have just released the best of album entitled Thunder, Storm and Passion where they have re-recorded the songs from their arguably best, 80s era. The band’s founder and guitarist Jürgen Breforth is here to give us some very nice answers about the past, present and future of this stubborn quality group! 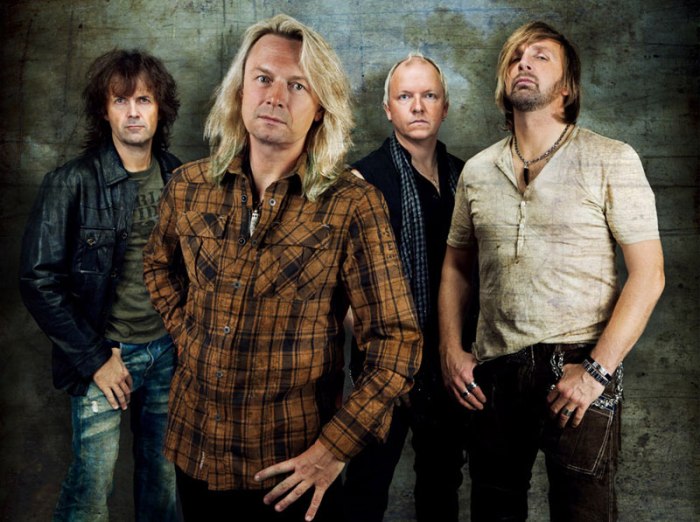 Greetings Mad Max and welcome to the pages of Metal Sound! How are you guys doing these days?

Hello…great to hear from you and thanks for your support and for promoting Mad Max in Serbia!

The main reason for this chat is your new release Thunder, Storm and Passion which represents re-recording of your classic tracks. What was the main cause for the decision to re-record some old tracks?

For quite a long time our fans were asking us for a best of album since we never actually had that before. When we played the world famous Bang Your Head festival last year we played a very special Best Of 80ies live set and that’s how it all started with Thunder, Storm and Passion!

Tell us how did you pick up the tracks which are featured on this album, were the fans voting or you simply took the ones that are the most successful on the live gigs?

Actually it was a mixture of both…fan voting and the best live tracks. Since this is our very first best of album ever we decided to concentrate on our 3 classic albums we did in the 80ies. When we played this year’s Sweden Rock Festival we played “Thunder, Storm and Passion” for the very first time in its entirety and it worked perfectly…all the 80ies songs sounded fresh, energetic and powerful including some songs we had not played for 30 years…haha!

I can safely say that Thunder, Storm and Passion is sounding up to date while you have kept the spirit of the 80s intact. How do you comment upon this statement?

This is a perfect statement! This is exactly how we wanted it to sound…keeping the spirit of the 80ies and capturing the raw power of our live shows!

The second CD features the recording of your live gig on Bang your head 2014, what can you tell us about this show and why did you decide to feature it here?

Bang Your Head  was a very special show for us…sharing the stage with our heroes like Stryper, Europe and our good friend Axel Rudi Pell was a huge honor and with this in mind I guess we played one of our best live shows ever! Thank God it was professionally recorded in good quality and we thought this might be the perfect present for our fans. So our record company SPV created a wonderful designed digipack including the live album additionally to the studio recording of our 80ies classics!

The songs chosen for Thunder, Storm and Passion are taken from the albums Rollin’ Thunder, Stormchild and Night of Passion, would you say that this is the most successful period for Mad Max?

When we play in countries like Brazil, North America or Scandinavia a lot of fans are bringing their old Mad vinyl albums from the 80ies for autographs and it is pretty obvious that this was our most successful time. The old vinyl albums in the 80ies were available worldwide and this was the time where fans bought the albums ‘cause there was no internet, no streaming and no illegal downloads…just records or tapes (good ‘ole times…haha)!

All those 3 albums were released through Roadrunner, how do you recall the work with them and their position in the metal world through the decades?

This is a very good but difficult question to answer! On one hand when we got our very first record deal for the Rollin’ Thunder album it was a huge step for us knowing that Roadrunner would release and promote the album worldwide. Roadrunner were and still are a mighty record company and they were the first to sign legendary bands like Metallica! But when we had the chance of our lifetime with the Night of Passion album to get signed by a major American record company who wanted to establish us as a German version of Dokken and send us on tour all over America Roadrunner stopped the deal and killed us basically as a band because they blew the deal. In New York we met the famous producer Max Norman (known for his brilliant work with Ozzy Osbourne). He was ready to go to produce Night of Passion  specially for the American market and then Roadrunner also killed that.

Since you actually took part in the heavy metal in 80s can you tell us the best memories from that defining period of time?

For us the best was that we got the chance to go on tour with so many great bands like Stryper, Uriah Heep, Pretty Maids and playing lots of huge festivals, even the world famous Dynamo Open Air in Holland with the legendary Testament! Our songs Fox on the run and Hearts on fire from the Night of Passion album were even played a lot in the radio and we also got some TV shows.

There always were discussions about the musical direction of Mad Max, some have called you hard rock while others labelled you as heavy metal, what would you say about your musical direction?

When I founded Mad Max in 1982 we were definitely going Heavy Metal influenced by our heroes Iron Maiden and Judas Priest. That’s why we called our very first (self financed) album Heavy Metal. Rollin’ Thunder and Stormchild still captured that heavy metal feeling and when it came to record Night of Passion our favourite album was the classic Under Lock and Key from Dokken. So this was basically more hard rock style than heavy metal.

It seems to me that your cooperation with SPV took the band on some new level of popularity, what would you say about the work with SPV and the last few years in the life of Mad Max?

You are definitely right…SPV gave us the chance to play two extensive european tours with the mighty Axel Rudi Pell and this massive touring gained us back a lot of old fans but we also found a lot of younger fans who did not know us from the 80ies. Besides that SPV/Steamhammer is a very respected company and both fans and press/media people know that SPV is delivering quality which means bands that are signed by SPV are bands worth listening to.

One goofy question: have you seen the last Mad Max movie and what do you think about it? Anyway, was the band named after that movie and why so?

HaHa…to be honest I haven’t seen it yet! But I saw all the Mad Max movies with Mel Gibson. The story behind the band name is that in 1982 our singer Andreas Baesler came up with the name. Nobody knew the name Mad Max at that time ‘cause the very first Mad Max movie with the at that time unknown Mel Gibson was kind of an independant movie from Australia. For us the Mad Max character we had in mind was a medieval magician and this is the reason we featured that character on the cover of the re-release of our very first album Heavy Metal!

What lies in the near future for Mad Max, are some tours planned or you are writing the new music?

The rest of 2015 and 2016 will see us touring all around the world promoting and playing live our best of album. We would love to go to Japan for the very first time and also play some of those Metal Cruises. And we would love to come to your country Serbia as well. This is not the time to write new music…this is our time for Thunder, Storm and Passion!

That would be all, I would like to wish you all the best and thank you for this conversation! Your last message to fans over here…

Again let me thank you so much for helping and promoting Mad Max in Serbia. We have never been in your wonderful country and hopefully the best of album will give us the chance for some shows in Serbia!