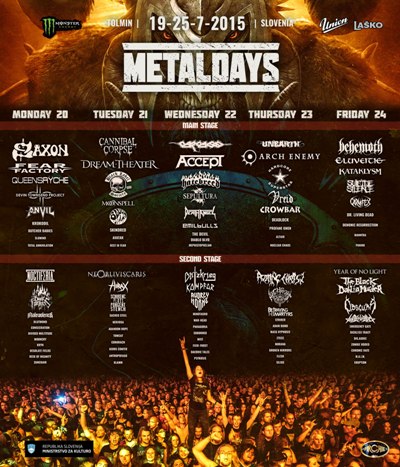 This was my 5th time at Tolmin, at Metal Days, a sort of anniversary so to say. As usual we were able to spent few says at Tolmin watching some great bands out there performing and having fun though these several metal days.

Since MD are quite specific festival it was indeed interesting to watch some of the bands out there and also to have some relaxing time with the friends (or to meet some new as well). Aisde of musical aspect you also have sort of fun side of the festival since there’s a river, too. Also, most of the important shows and bands are starting as the night falls so you have a plenty of time for everything (playing card-games for example).

When it comes to bands I have opportunity to watch and listen some great acts like Carcass (particularly the best show!), Moonspell (they’re performing at the second stage), Accept (quite a good traditional HM show as always), Kampfar (finally for the fist time ever), Arch Enemy (I didn’t expect such a passion, good show, too with selected Youtube hits), Sacred Steel (also, for the first time ever) Behemoth (always on the top) et cetera. But, also I have spent, for the very first time, more time at the second stage where there were some mostly unknown acts, but yet it was interesting to see some newcomers. So, somehow it turned that the 2nd stage has become really interesting and important like never before.

All in all, I spent some good time at MD 2015, relaxing aside that it was quite a hot weather. Also, some bands from more northern part of Europe were comparing at the stage about the weather conditions, too 🙂 never the less, it is always welcome to come back and to visit Tolmin!