MetalDays 2016 was my 3rd year in a row in Tolmin, and definitely not the last one! Without wasting time on praising the line-up, which keeps getting better and better with each passing year, I can happily say that coming to Tolmin has become a tradition for me. As I’m not the only one who feels that way, I keep meeting the same people every year and I must admit they have become a big reason why I keep coming back to Tolmin. Great bands are, of course, the No. 1 reason why people go to festivals (or not!?), but the nature, the surrounding area and the people usually help me decide/confirm that MD is on my festival map every year. Honestly, not a lot of festivals can top MD! 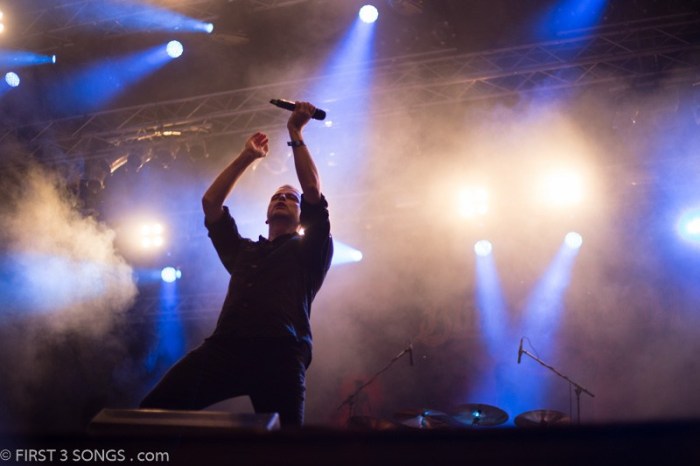 This year, the organizers paid their respects to the late metal boss, Mr. Ian Fraser “Lemmy” Kilmister, by naming the big stage after him. I think there wasn’t a single metalhead in Tolmin that didn’t salute this! In accordance with the big name, the Lemmy stage featured a lot of great bands and performances and, luckily, even the weather served us with a few exceptions of short rainstorms.

Day 1 was full of great bands performing on the Lemmy stage:

– the Israeli band ORPHAND LAND; although they’re not really my cup of tea, they are a very interesting band to see live, especially due to the Oriental influence
– FLESHGOD APOCALYPSE; my personal favorite for this day, both in the visual (thanks to their recognizable costumes) and auditive (all the symphonic experience) sense
– the “oldie, but goldie” SACRED REICH
– the almighty Swedes DARK FUNERAL; who were not that particularly interesting, as their “new” sound offers nothing new, but it was still a band I really wanted to see live at least once
– the thrash legends TESTAMENT; yes, they’ve been around for decades, but seems they haven’t lost the enthusiasm and touch one bit as they put on a great, energetic show! And I mustn’t forget to mention Billy’s political statement regarding the genocide committed by white people against Native American Indians; it’s such a nice change from all the political correctness nowadays. 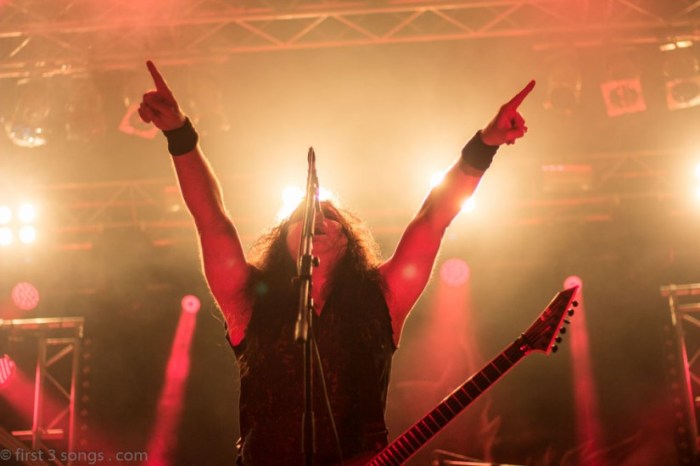 Truth be told, I missed all the bands from the 2nd stage, as the ones I wanted to see and hear (Morana and Battle Cross) played at the same time as the “big” bands on stage 1. And, well, I’m used to “wasting” my time being lazy on the beach(es) for most of the day, catching up with people I haven’t seen in a year. I am, however, sad for missing NA CRUITHNE from Ireland, they seem to have put up a good show!

Day 2 featured one of the bands I’ve been wanting to see for a while:

– INSOMNIUM, the Gods from Finland; I was happy as a kid in a candy store when they came to the stage! Even though their music is not that suitable for a big festival, as their music and lyrics require a more “subtle” atmosphere, their performance was just as I expected – nothing less than a perfect! I woundn’t mind seeing them next year (a small hint for the organizers

). Needless to say they were the highlight of not just this evening, but the whole festival!

And let’s not forget to mention:

– unicorn lovers, the fantasy power metal band GLORYHAMMER; very fun, very energetic and a welcome break from the heavier music (they brought me back to my “power” phase). Unfortunately, their performance was interrupted for me by heavy rain, so I returned to one of my favorite tents to continue playing Cards Against Humanity (this seems to have become one of the most cherished activities during MD). Of course a lot of people weren’t chickened out by the rain and, in order to contribute to the fun, they started wrestling in the mud (note to self: have to try this next year!)
– ARKONA; as this was not my first time seeing time and as they are very popular in Serbia, I knew what to expect. And I expected nothing less than to jump and dance the whole time!
– SKINDRED; who are really really really… not a band I was dying to see. However, I have to praise them – their performance was one of the most energetic ones on MD 2016! The crowd was jumping, screaming and crowd surfing from the moment Benji came to the stage. At one point, and this was very fun, he asked the crowd to squat (and there were non-Slavs in the crowd), take off their shirts and imitate helicopter waving. All in all, the most pleasant surprise this year
– SKÁLMÖLD; also one of the bands I was looking forward to see. They are not a band I can listen to every day, as you have to be in a special mood for their experimental music, but they did do wonders to my ear and, amazingly, I didn’t fall asleep during their performance
– CATTLE DECAPITATION; okay, this I literally checked out for a few minutes just so I can say “been there, done that”
– last, but not least, the black metal legends MARDUK; I was very surprised with the good communication Mortuus had with us, his faithful crowd. The show was very good, not spectacular, but very very satisfying. 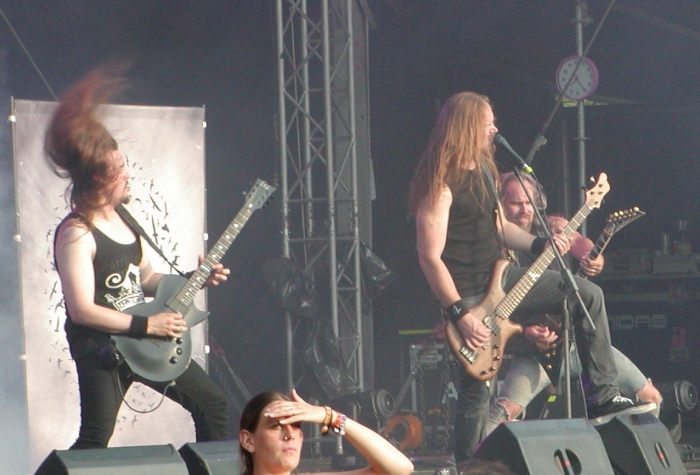 – MELECHESH; luckily, they overlapped with SKINDRED, so I managed to see most of their show. I have already seen them twice (thank you 70K), but didn’t get enough of them. Even after seeing them this year, I think I could see them a couple of more times. Needless to say they were amazing in terms of the show and the atmosphere they created!
– THE STONE; “my guys” have been around for two decades and all those years on the stage made their gigs into very professional ones. The fact that they played as the last band at 1am meant the perfect atmosphere for the message their music is carrying. I enjoyed every minute of it and I do hope to see them again in the next few years.

Day 3 didn’t offer much excitement for my taste, but there were a few good bands on stages:

– ABORTED; pity such a band played in the afternoon
– PRO PAIN
– DYING FETUS; they put on a really good show! Not that I’m that much into them, but they were I band I had to see and feel the atmosphere they create. The crowd was ecstatic from the first to the last song
– NAPALM DEATH; I think no introduction is needed for these pioneers. Very loud, very energetic, very good! The security had a lot of work to do during ND, but how can they not with such energy which you could feel miles away
– KREATOR; as expected, the thrash metal Gods thrashed as usual! This was my 3rd time seeing them and every time they give 100% on the stage, regardless of the number of people they’re playing for. Do I have to mention the crowd was crowd-surfing, jumping, making circle pits? No I don’t

– DIE APOKALYPTISCHEN REITER; good performance, but as they’re not a band I listen to at home, they were not the highlight of my evening.

The 2nd stage didn’t see much of me on day 3. Maybe I missed something worth seeing, but I didn’t feel like spending much time on my feet, so day 3 was mostly spent playing CAH (Cards Against Humanity) under my favorite tent.
Day 4 was also not full of bands I was eager to see, but a few big names have to be mentioned:

– IMMOLATION; I’m not a fan of these Yonkers, but they’ve been around for so long and I simply had to pay my respects to them by listening to a few songs
– SEPTIC FLESH; the Greeks treated us with a splendid performance, especially with the songs from “The Vampire from Nazareth” and “Anubis”
– ELECTRIC WIZARD and their slower, doom rhythm helped the crowd cool down from SEPTIC FLESH in order to be ready for the next loud and fast show, the
– DEVILDRIVER; I wasn’t keen on listening them, but since I’m a fan of Coal Chamber, seeing Dez made me happy
– AT THE GATES; definitely the loudest band on MetalDays 2016! I had the feeling the ground was shaking during their gig and not just because the crowd was jumping. What a way to end the night!

I was present in front of the 2nd stage for two bands only:

– BURY TOMORROW and OBSCURA. I have no idea why I went to see BURY TOMORROW, as metalcore is a genre I actively dislike, but I was passing by and I had to stop and try to listen to these guys. They are nice and I kind of felt guilty conscience for not liking their music, but there more than enough people crowd-surfing and jumping to their music, so I think they didn’t feel my dislike.

And then came the last, 5th day. It’s always the worst day, regardless of the bands, because we are all tired and even more easily saddened by the fact that everything is about to end. However, the great line-up for this day made it a bit easier for all of us, or at least me. The Lemmy stage featured:

– VARG; with their famous looks and typical German energy
– EINHERJER; also one of the highlights of MD 2016 for me! These guys are simply too adorable not to love. And their music is fine, too

– EXODUS; I love the fact that there were quite a few great thrash bands, these guys included! I really think there’s no point in emphasizing how fast and energetic their performance was, because everyone who likes thrash expects nothing less
– BLIND GUARDIAN; ah even though I haven’t been listening to their new(er) stuff, they hold a special place in my heart and it went without saying that I shall enjoy their performance very much. I was wrong – I was ecstatic during their show, mostly thanks to the set list which included “Time Stands Still” (one of my favorite songs!), “Mirror Mirror”, “Nightfall”, “A Script for my Requiem”, “The Bard’s Song”, etc. BG, thank you for making my last festival day so lovely!
– DRAGONFORCE; have to admit I missed most of their show, but as I hear from others, they were really good!

The 2nd stage was occupied by guys from GUTALAX (such a fun band, didn’t expect I’d like them so much), VALKYRJA (was in the front rows for the most part, until BLIND GUARDIAN came to the stage) and HORNA.

I stayed at the camp one day extra after the festival and I don’t think I’ll be doing that ever again, on any festival. I had no idea how big the area was until it was cleared out, just a few hours after noon. The trash, emptiness, vastness of the space perfectly described my mood after yet another great festival ended. It was all, however, worth it! And I’ll be seeing you, MetalDays, next year for sure!