Minotaur has a new record Beast of Nations so tell us something about the newer record? Could you present it from your point of view?

Dave: I think the new Album is a great addition to the Thrash Metal scene nowadays. Fast, brutal riffing and screams from hell instead of partying, skating and the next Anthrax-ripoff. I really think this album is a worthy successor of “God may show you”..we will not”. Every song is powerful and the slight influences of punk are really great. I think while playing live all songs will cause a monstrous pit and some whiplashes! Andi: “27 dead” is the powerful opener and lyrical about the serial killer Dean Corll. The story of killing 27 boys, inspired me to write a song about this sick person. “27 dead” is a straight forward `TAUR song and at the end of that song there is a little Phone call sample from the candy man´s accessory who did a confession to his mother about what he has done with his Partner in crime. The 2nd Song is “Beast of Nations” and is our drummer´s fave song of our current EP. The title track is another sonic assault, raw and in your face with some cool backing vocals of my buddy Wes Rhodes (ex-Dekapitator). The 3rd song named “Ignite me”, begins with a spoken sample of Charles Manson. I would say that this is a typical – you will get what you deserve – `TAUR song, it´s fast and heavy including some groovy parts . Finally there´s “Skipping the sin” which is pretty unusual for `TAUR cuz it starts off with a kinda punk riff but ends in a traditional pure Metal Meltdown, though. “Skipping the sin” is about religion, in particular about the Catholic Church sexual abuse cases. The Recordings and the mixing for “Beast Of Nations “ took place here in our hometown Hamburg. The Mixing duties for instance, was done at Schrödey´s Absurd studio who also worked with bands like Holy Moses, and Blitzkrieg. The Artwork was made by Phil Lawvere who is well known for his work with Kreator, Warrant and Celtic Frost. 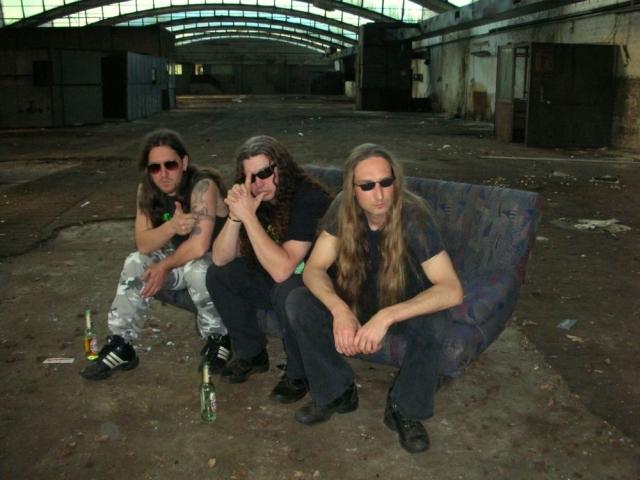 Please, also could you present the band Minotaur to our readers since this is the very first time that we have a chance to have an interview with you.

Andi: MINOTAUR was formed back in 1983 by Joerg (drums) and after a couple of months I joined the band on vocals and Guitar. After a couple of line-up changes in 1986 we recorded our first Demo “The oath of blood” which got pretty good reviews European wide and was also voted for the 7th best Demo in 1986 by the German RockHard” fanzine . We also were part of RockHard ´s /Roadrunner Sampler called “Teutonic Invasion Part One “in 1987. During the beginning and early days we played and toured with bands as Rage, Risk, Messiah, Samael, Vendetta, Helstar, Torment, Emils, Nihilist, Kazjural, Die Hard and many, many more. Our first LP “Power Of darkness” was limited to 2500 copies which were sold out after a few weeks. “Power of Darkness” is also our first CD which was re-released via I HATE Records. This swedish record label also published our 2nd Album “God may show you mercy…we will not “ Our current line-up is: Dave on bass, Jörg on the drums and myself on guitar / vocals.

How would you like to describe your style of playing?

Tell us something about your influences as well. Dave: My influences while playing bass guitar come mostly from a big bunch of old Thrash Bands. I think even if I’m new to the band nothing will change and the sound stays as morbid and brutal as it always was. But I think you asked for the band’s style of playing. I think Andi and Jörg had the same influences as they recorded the albums. Maybe not the same bands, but the same “quest” for playing and hearing extreme metal. Andi: I would say that MINOTAUR is one of these typical aggressive and energetic german thrash bands from the mid/late 80ties. We grow up with all these great NWOBHM Bands which also inspired us for sure.

As a matter of fact this is your third record (although this is MCD) so tell us something more about your previous albums?

Andi: Our first LP called “Power of Darkness” and was released via Crazy Records and later in re-released in 2010 by I Hate Records from Sweden – featuring four more Bonus tracks cuz the orginal “Power of Darkness” contains just eight tracks which was a little bit too less for a album. “God may show you mercy…we will not” was released in 2009 and is our second full-length effort. Furthermore we released a couple of 7 “ inches.

Could you compare your new record with your previous releases?

Dave: It’s a hard question because Minotaur haven’t changed their style of playing ever so hard, that you can say “Oh, album A is complete different to album B” like most bands did after the 80s to get more money. The recordings sound better than on the first demos and the Power of Darkness, thats obvious, but it stays Thrash Metal. So all I can say it’s a good addition to the other albums! And as I said before, a worthy successor.

Dave: Definitely. I think everyone of us thinks playing live is the best thing a musician can do (maybe behind drinking and chatting afterwards with the fans), so we are planning some gigs in the future. Maybe there will be a tour next time, so stay tuned!

What is the next after beast of the Nations for the band?

Dave: Playing many gigs, writing new songs and hopefully making another album. But playing live is the first point on our list! I have some bands in mind to play with, but we have to look for the possibilities to make it real. And new songs: I dont think it would be a problem to make some great new songs. Andi and Jörg made great songs since ’83 and even if I’m younger than the rest of the band I have some songs ideas.
Thanks for the interview and vist us here: http://www.minotaur-thrashers.com