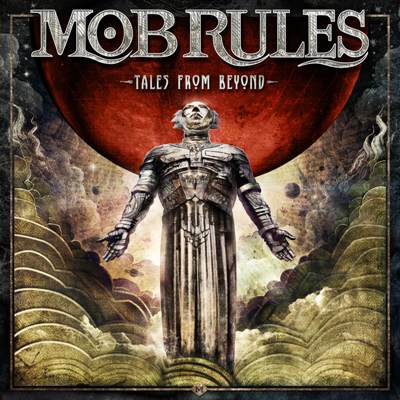 Mob Rules is just about to release their brand new record Tales From Beyond and I have to say that I am indeed surprised with their new issue Tales From Beyond. We are facing here one very powerful release with lot of melodies but also there is much strength in their new material.

From the very beginning, from the opening epic song Dykemaster’s Tale, to the very last tune they have shown some really fresh moments which are missing to the most of the bands today. I can compare their style with some bands like Brainstrom, for example, but I have to say that Mob Rules has their own style, more based on keyboard lines, which one could hear here and there. Also, aside of some dark moments they also do have some brighter stuff to present. Already, I could admit that their latest effort sound as one of the most promising acts in the first part of 2016 at least when it comes to ”true metal”. The vocals are indeed on their place so to say, while the perfect production also counts as well. Guitar riffing are indeed killer ones and keys are there to give some more dark and monumental atmosphere. So, the entire record sounds very promising. In a way, I think that we have waited for some time for such a powerful record where the band has putted much effort in each track and every track has its own way of sounding.

I think that the fans and followers of so called melodic or true metal should find themselves in Mob Rules‘ new record Tales from Beyond. I have some favorite tracks here like the opening theme Dykemaster’s Tale or The Healer. From my humble opinion these two tracks could present their latest material in the best possabile way.