Swedish true Heavy Metal tyrants RAM are back with their fourth full length enigmatically entitled Svbversvm, their singer Oscar Carlquist is here to tell us everything about this fine release of pounding metal and other details about this band. 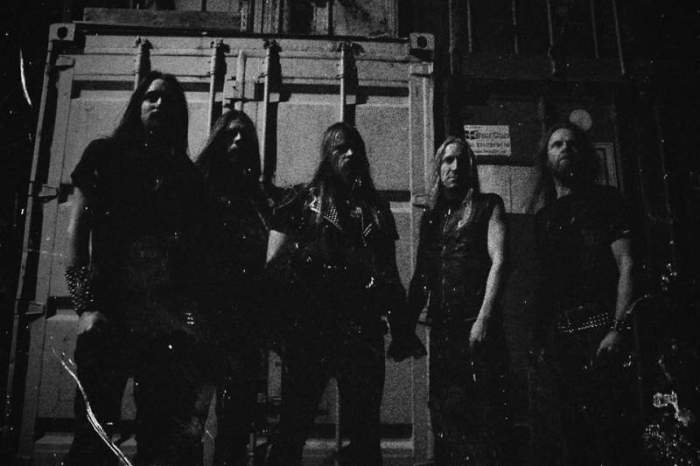 First of all, I would like to congratulate you on Svbversvm – I truly feel that this is the best RAM’s offering up to date! How would you comment upon this statement?

I probably agree, I like all of our albums but Svbversvm just might be the strongest one, I  kn o w   that we will have to incorporate a lot of the songs from the album in our live set from now on and that is always a sign of the strong material.

Let’s return back in time a little bit – 2012’s Death was somehat slower and a bit experimental (in true HM style of course) while Svbversvm returns to pure Heavy Metal style of golden era. How would you comment upon this statement?

I would not really agree, to us Death was a return to a more simple style since in our ears experimental Lightbringer album, if you listen to the song structures on Death you will see that from a musical arrangement point of view Death is a quite simple album in RAM standards. The songs on Svbversvm are far more complex from that point of view, but they might have a more natural flow to them.

Three years have passed since your last album, how long did it take to write Svbversvm and was it a collaborative effort?

It took us quite some time to write Svbversvm, when we started writing it we were in a  place in our career that was very low on inspiration, we knew we needed to do something different but we didn’t know what so it was a hard and slow process that was tiresome and frustrating. But after a while we broke through some kind of wall I guess and got it done. All the songs were written by me and Harry except Enslaver where martin wrote the music and I wrote the lyrics and some of the vocal melodies. And Return of the Iron Tyrant, that was written by me, Harry and Martin.

It seems to me that with Svbversvm you took much time to write catchy refrains and the album is the most addicitve of all your albums. Was this done on purpose and how do you see this feature?

I think that Svbversvm’s strongest trait is that the melodies are very, very good and we kind of missed that a little bit on the Lightbringer and Death albums, we certainly had it in the beginning and now we focus more on the melody again.

Can you please take some time to explain the title of the album and lyrical content found therein?

Svbversvm is a game of words, i Swedish the word for universe is universum and I mixed this with the word subversive to get the word Subversum that I rewrote with the old Latin way to write it to get Svbversvm. So the subversum to me is the place you will get after a subversive takeover of the universe. The lyrics to the song with the same title speaks a lot about how a revolution can be spiritual and that one can revolt within and by doing so open the gates for others to do the same. The ruling powers of today are making people focus too much on the outside but the power lies within us.

I would also like to hear your comments abour your Under Command split with your brother band Portrait, how did that split came to be and how are you satisfied with it?

Me and Christian were talking about the split and we wanted to do something truly underground and old school so we took contact with Metal Blade and said we wanted to do a split disc, they liked the idea so we took it from there. For us it was a cool statement abut real Heavy Metal and our dedication to and love for it.

Svbversvm deluxe edition features bonus live gig from your 10 year anniversary, please tell us something about that event and your anniversary?

That was a gig that we organised ourselves in Gotheburg to celebrate 10 years since the release of our first EP Sudden Impact and we invited Portrait and Trial to play with us. We recorded the gig with like 6 or 7 cameras and recorded the sound on a portable recording system. We were very pleased with end result on the DVD.

Your last album was marked by magnificent video Flame of the Tyrants, are preparing something similar for Svbversvm as well?

We are going to try to get a video released, yes, won’t say anything about it, don’t want to spoil the surprise.

How do you look upon the state of heavy metal nowadays, it seems that the tradition style has returned a little bit with some great new hordes, who are your favorites from today’s scene?

The state of Heavy Metal is much healthier today than it was say 10 years ago. The old school is back and I think the metal scene need its backbone original Heavy Metal sound to function properly. Of the new bands popping up, I like Portrait, Trial and Sacral Rage.

Where can we expect to see you in the next period, are some tours already planned?

We are in the planning stages of a tour that will commence in early 2016.

That would be all for this time, I would like to thank you for this interview! Your last message to fans over here…

BANG YOUR HEAD OR LOSE IT, HEAVY METAL TYRANNY!