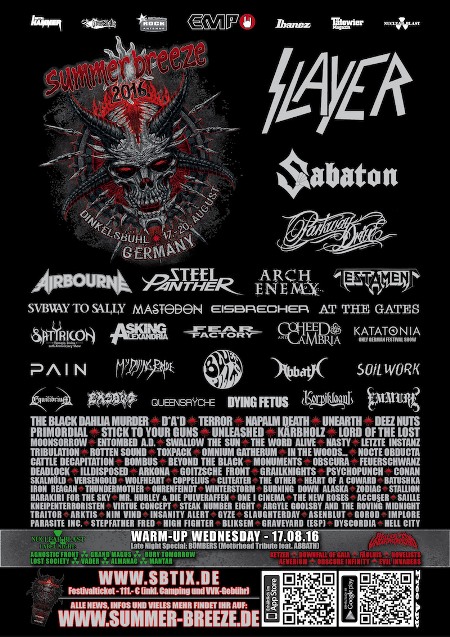 There was so much happening during SB 2016 so it turned out to be one of my favorite festivals in Germany. 2016 was such a great year for metal meetings. SB 2016 proved to be the leading one not only by the great number of people and visitors but also organization is quite good as well so after infamous Wacken, if you something more relaxing and something more extreme then you are welcome at Summer Breeze days.

Anyhow, the festival happens in Bavaria so the laws are different, but, anyway, this is still quite a big festival with large festival ground. It’s close to medieval town Dinkelsbuhn.

Never the less, SB 2016 had such a great line up including some of the bigger names like Slayer. Anyway, some of the most remarkable shows were from Satyricon (they did this Nemesis Divina 20 anniversary show where they performed the entire cult record), Abbath was amazing as well, Carcass was furious and fantastic and so Slayer unleashed great energy as always. Queensrÿche was perhaps the best but since there was quite a different audience it was somehow odd to watch them at AB where the people are more extreme oriented. Actually my first show was Tribulation one. These uprising stars of black/death metal have provide some evil vibes though the opening day. Pity, I was not able to reach Moonsorrow’s show since I was having my time at Carcass. I also watched here and there some other groups which I like less like Arch Enemy, Pain and alike.

All in all, this was my second time to be at SB so it was better I guess from the first one and I hope that they will continue with some other bands than extreme metal ones. Already in 2017 there are some nice names confirmed so see you out there!