Them is a completely new name to me, and although that the band members comes form different bands we could consider them as one of the best newcomer in 2016. I have to say that I indeed surprised by their latest effort Sweet Hollow. All I could say that their new album ineed sounds like King Diamond from his best years! 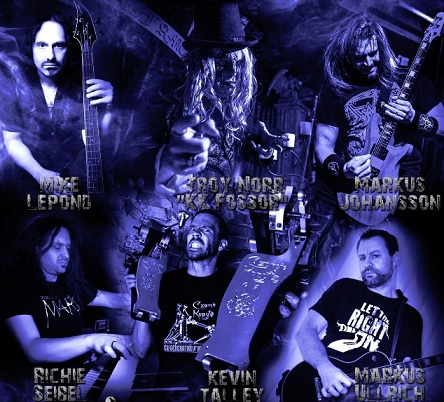 Them is one interesting band or project with various musicians influenced by King Diamond’s legacy. How did you get the idea to start such a band?

THEM started out as a King Diamond Tribute band called “Them – The King Diamond Tribute.”  The tribute band performed over 20 shows in 4 years. Since a few members including myself came from Coldsteel’s last lineup before disbanding back in 1993, I knew something special can be created in an original sense. I spoke to the members at that time to write one song and the request was received with little enthusiasm. After the tribute band’s last show in May 2011, we decided to begin work on the album. Over the course of the next 6 to 8 months only pieces had been written. Around that time period Coldsteel reformed, recorded an EP and was offered a direct slot for Helloween’s USA/Canadian tour. The band members decided not to do the tour as well as not being involved with me in the original THEM. I continued forward with Markus Ullrich (Lanfear, Septagon). I had met Markus in 2012 after Lanfear performed ProgFest in Atlanta. We were eating dinner together but did not know each other at the time. Andi Preisig from Battlecry Records had invited me to dinner to discuss Coldsteel. As I was flipping through pictures on my iPad, I had shown Andi pictures of THEM concept art and logo and even makeup design. Andi was intrigued as well as Markus. Markus remained quiet and listened as I explained my ideas. Andi had stated I should do this project as soon as possible. Little did I know it would take several years before it would be launched. When Markus returned to his home in Germany, we kept in touch on Facebook and had become close. Fast forward to the time period where Coldsteel/them king diamond tribute band members decided to part ways with me…In comes Markus. When I told Markus what had happened, he offered to write the album with me. Since I knew Markus was an excellent song writer, I had agreed and there you have the birth of THEM!

If I am correct Them is one international music project since you have various musicians from different countries (Germany and USA). Please, could you present your band mates?

As a matter of fact you’ve just issued your debut effort for Empire Records. Please, present your debut record to our readers.

In Feb 2016, we released a limited run of “Fear THEM” a 3 song sampler cd sold exclusively on our first tour as direct support for Helloween throughout the USA/Canada. On Sept 30th 2016, Empire Records release our debut full length album “Sweet Hollow”. “Sweet Hollow” contains 12 tracks. 9 are songs, 2 intermezzos and 1 intro

In which formant comes the new record Sweet Hollow since I have notice that it appears on CD and vinyl addition as well. What could you tell us about LP edition?

“Sweet Hollow” is released on CD and Vinyl LP will be out the end of Oct beginning of Nov. A collectors box set will also be made available to a really low number. I believe 111 copies. That should make it’s way out sometime in early spring right before we go on our first European tour.

When it comes to lyrics and visual work you follow Kind Diamond obviously. But, nevertheless, say us something about your personal inspiration.

There are some people that feel I followed King Diamond. I love King Diamond. As a fan I support everything he does. I go to his shows, purchase his merchandise. However I love horror too. My favs are Evil Dead and Tales From The Crypt (Word has it Tales is coming back).  I have written tons of songs over the years mainly for Coldsteel. I have written about war, social issues and even horror. The main difference is the entire album is a complete story. I also developed my persona (Klaus Konig Fossor or KK Fossor). Every detail for my persona has been accounted for. His origin was most important. Even though he looks it, he isn’t an evil man…at least not…yet. I never intended any of this as disrespect to the great King Diamond. I am not trying to replace him. There is and always be one King Diamond. I am merely taking a different path with some influences from him as well as my horror favorites.

There are many bands now that are influenced by Merciful Fate or Kind Diamond so how do you look at it? Like it or not but, yet I think that it’s better to have traditional based bands than so called modern metal bands, if they’re metal at all…

Many kids of today’s day and age consider their music to be “metal”. In one way it is. It is a sub genre of Heavy Metal that has evolved. I personally am not a huge fan of it but I do have some likes. My heart lies with a sub genre of metal that was big for a short period of time in the late eighties and only recently started to rise up again….Thrash Metal. Classic metal “Judas Priest, Iron Maiden…Etc” is high on my list too! Yes, there are numerous bands influenced by Mercyful Fate and King Diamond. It isn’t bad. It is great that they are. As long as the band isn’t flat out copying the original there is nothing wrong with it. How many hair bands were there back in the day? How many thrash bands were there back in the day? So if a band performs in a similar fashion as King Diamond or Mercyful Fate what is the difference?

And the final question. Would you like to continue Them in the future and to release anymore records or you prefer to stay with this one?

Originally my personal plan was to release this 1 record (like it or not) as my exit from the music scene. Now, with the success of the album I do not think I can depart just yet. Yes, It is very possible THEM will release a follow up to “Sweet Hollow”. If so, it will not be a continuation of the story per se. My character will evolve physically and continue onward in a new location, a different time period, interact with new characters and will continue to be haunted by his past. The second and subsequent albums (If any) would never be part of a trilogy. There is always a grander vision surpassing the standard trilogy of tales normally written by artists of today.