The release of White Skull’s newest effort entitled ‘’Forever Fight’’ was occasion for this interview. In next lines, the newest band member Elisa and founding member Tony, were answering to questions about their new album, but also on many other things, concerning the band and such. Enjoy! 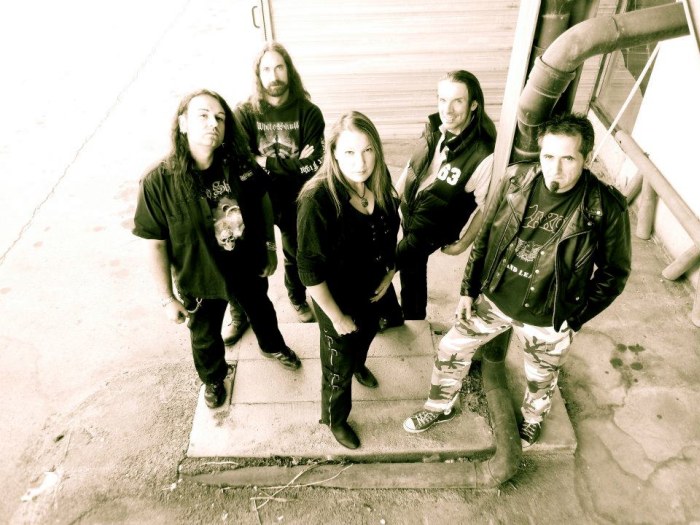 Elisa: Hi there! Thanks for the interview and hails to you all. Tony: Hi Vladimir, nice to meet you. Everything’s are good.

White Skull has returned with the new album entitled ‘’Forever Fight’’, so, what can you say about your newest record?
Elisa: we are very happy about the new album. The new line up is very strong and optimist!

Album’s name is ‘’Forever Fight’’, but artwork’s concept for such title is a little bit strange. Are you sure that axe with the skull on the top represents album’s name in right way.
Elisa: yes, why not? The axe is a symbol of barbarian wars and of heavy metal as well; the skull is a symbol of the band… so what’s better?

Most of your lyrics have been based on legends, myths, epic tales, does ‘’Forever Fight’’ continues in that manner?
Elisa: yes “FF” talks about barbarian invasions in despite of the Roman Empire. The history remains a primary theme of our albums.

Which idea was to make song like ‘’Beer, Cheers’’, it’s a little bit odd for the sound of White Skull?
Elisa: it was an Alessio’s idea and it represents the frisky soul of the band. Also, after all the battles and tragic stories told through the album, it was a good end.

What do you expect from this album, and do you have any favorites from this album? Also, toward the previous records what kind of refreshment and innovation this album brings forth?
Elisa: I love the whole album, but a couple of my favorite songs are “Spy” and “A mother’s revenge”. The greatest innovations are the new female vocals and the introduction of the sixth member of the band, Alessio at the keyboards.

Elisa ‘’Over’’ De Palma is your third singer so far, can you tell us a little bit about her. I think that she sounds much like Federica de Boni. Was it your decision to have vocalist who’s remind on Federica’s vocal style, or something else? If I’m not wrong, she have played guitar in Brazen band, which members have been all girls, except their keyboard player.
Elisa: well every voice is different from the others and I don’t see that similarity of my voice with Federica’s one. Btw yes, I played in several underground bands before joining the Skulls, one of them was Brazen. The keyboard player joined the band only after I went away from it. In facts I didn’t agree with their style and music so I left the band.

Also, I wanted to ask you why Gustavo had to leave the band?
Elisa: as far as I know, for personal problems.

How do members of White Skull manage to run both in their side projects and in White Skull? As far as I know, almost all members play in other bands.
Elisa: yes it’s true! And I can say it’s not very easy to find out dates for WS live shows. Btw we are doing our best.

Okay, can you tell us a little bit about beginnings of the White Skull, and how everything started, back in 1988, if I’m correct?
Tony: The True years of White Skull Born are before 1988, but we start to count from 1990. In the beginning we was really in a bad situation, there wasn’t musician who want play your own music, all the guy wanted to play like cover band, and I wasn’t agree with them and I changed line up for that reason.

Can you tell me, what is exactly ‘’Italian Metal Alliance’’, does that still exists?
Elisa: oh it’s been years since I’ve heard that name, and honestly I don’t really know if it still exists! It was such a congregation of people who tried to organize concerts and metal festivals.

You have eight studio albums, one EP and one Single….do you have plans to release some live DVD or audio album, maybe some compilation with demos, unreleased material…?
Elisa: we’re thinking about a live DVD in the next months… who knows!

What do you think about today’s Power Metal scene, and also, about Power Metal scene in Italy. Do you like bands like Elvenking, Drakkar, Cydonia, Rhapsody…?
Elisa: well… honestly I came from thrash metal and I still follow that scene, hehe!

By my opinion, ‘’Public Glory, Secret Agony’’ is one of the most prominent power metal albums at the end of XX century, do you agree with me, and how much this album have been important to you, comparing to other titles from your catalogue? It surely contains some of the best tracks you have composed in your carrier. Also, I think that’s the first album, through which many people in Serbia heard about White Skull.
Tony: I say thanks to you for your consideration about Public Glory. Public is a great album for me, in the past I can say that Tales was the number one and at the same level public, written one year later. Both albums were an important stone in our carrier. Now looking forward I can affirm that Forever Fight is the Best White Skull Album! I invite all the guys to listen it. As you know is not necessary to buy…

Where did you toured so far, and where do you have the most loyal fan base? You’ve been in South America, Japan?
Tony: No. We play in Europe and in Israel, but never outside the Europe. We have a lot of fan in Italy, Germany, and England and also in South America, but we never go there.

About your live shows, what songs are ‘’must’’ on your gigs, and how you concentrate on set-lists? Do you put more accent on new material, or do you make balance between older and new material?
Elisa: actually we are promoting the new album, but we still keep on playing several songs from the previous albums. Tony: our set list is composed from 16 songs, 8 from Forever Fight album, and 8 from the past.

How do you feel about concert bootlegs (audience recordings of your shows)? Do you see them as something that could harm your existence, or something like fine document of your history?
Elisa: Generally the sound is very bad so I don’t really think it’s a good “business card” for a band! Is it true that many Italians today dislike the song ‘’Lasciatemi Cantare’’ from Toto Cutugno? As it was exploited everywhere in the world, many times and through many years?
Elisa: It just makes us laugh. Tony: Who is Toto Cotugno??? Ah ah ah I’m joking.

How do you work with the painters on your cover-art? Do you giving them some instructions, how art should look, or you gave them all freedom to do the cover by listening to album and to develop its own creation out from the album’s sound?
Elisa: of course we gave to Diego Ferrarin all the instructions for the cover-art and then he put his own inspiration in the work.

Do you like comic books? And do you have any favorite characters, maybe someone from Sergio Bonelli Editore, or something from the Magnus’s opus?
Elisa: I am a great fan and collector of Sergio Bonelli’s Dylan Dog! Tony: yes, TNT Group

Also, did you ever thought to do make some songs based on some comic book characters?
Elisa: oh not at all! Personally I could not write of any comic or happy theme! (Beer, Cheers is an exception) What bands or artists made major influence on you to start playing instruments?
Elisa: Iron Maiden and Overkill Tony: Iron Maiden over all, but Saxon and Scorpions live in my heart.

What movies or books do you prefer most?
Elisa: horror books and movies Tony: oh a lot… Over all middle age tales and legends.

Does members of White Skull had any drugs or alcohol problems, and how you look on things like those?
Elisa: we only like beer Tony: no we are totally crazy by natural, we don’t need drugs or other shit. Beer is ok, jack also, Rhum is welcome…

Are you still in contact with previous members of the band?
Elisa: no Tony: Yes of course. With all of them, in January we talked a big dinner all together. They stay good, and except BB Nick, the other leave the music business.

Have you daytime jobs besides playing in band, and is it possible to make a living, only from playing in metal band in Italy?
Elisa: everyone of us has besides jobs. Almost any Italian band can’t live with music in Italy! Tony: yes, I’ve job, but a lot of free time… I’m lucky man….

Do you have and message for the skullheads in Serbia? Any chances to see you in Belgrade or some other town of Serbia?
Elisa: oh who knows! It would be nice to come, maybe for some metal festival! Tony: Hope to play there as soon as possible, and… listen Forever Fight!

This will be all for this interview, I hope I didn’t been boring. Ce Vediamo!
Elisa: this is the longest interview we’ve ever made, ahah! Cheers to you all. Tony: Thanks to you, all my best. Answering people: Elisa Over Voice Tony Mad Guitar